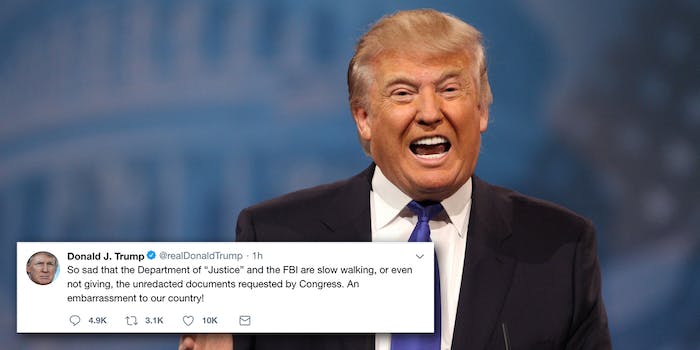 Trump says FBI and Department of Justice are an ’embarrassment’

Trump attacked the FBI and DOJ for not releasing subpoenaed documents related to the 2016 election fast enough.

President Donald Trump was busy tweeting Monday morning. After he tackled Mexico and DACA, fake news and Sinclair Broadcasting, and Amazon’s relationship with the mail, he made time to call out the FBI and Department of Justice.

In a cryptic tweet, Trump called the FBI and Department of Justice an “embarrassment” to the U.S.

“So sad that the Department of ‘Justice’ and the FBI are slow walking, or even not giving, the unredacted documents requested by Congress,” Trump said. “An embarrassment to our country!”

So sad that the Department of “Justice” and the FBI are slow walking, or even not giving, the unredacted documents requested by Congress. An embarrassment to our country!

Trump was more than likely inspired by comments made by House Intelligence Committee Chairman Devin Nunes (R-Calif.) on Fox News last week that called for the impeachment of officials within the two departments for being “very slow” to deliver documents regarding Russia’s interference with the 2016 election.

In a letter accompanying the subpoena, Chairman Bob Goodlatte (R-Va.) told Rosenstein the committee had asked for the documents months ago and received little or nothing in response. Nunes finds that unacceptable.

“I had to go through this for the last year, fighting the Department of Justice and FBI for documents,” Nunes said. “I think the American people know that they stonewalled for many, many months so that we could actually figure out that Fusion GPS was paid by the Democratic Party and the Clinton campaign to collude with Russians to get dirt on President Trump.”

FBI Director Christopher Wray has already responded to these complaints and promised to double its staff working on the document request.

“As the Director of the FBI, I am committed to ensuring that the Bureau is being transparent and responsive to legitimate congressional requests. Up until today, we have dedicated 27 FBI staff to review the records that are potentially responsive to Chairman Goodlatte’s requests. The actual number of documents responsive to this request is likely in the thousands. Regardless, I agree that the current pace of production is too slow. Accordingly, I am doubling the number of assigned FBI staff, for a total of 54, to cover two shifts per day from 8 a.m. to midnight to expedite completion of this project.”

Apparently, even with the 27 extra employees, the FBI still isn’t working fast enough to please Trump.