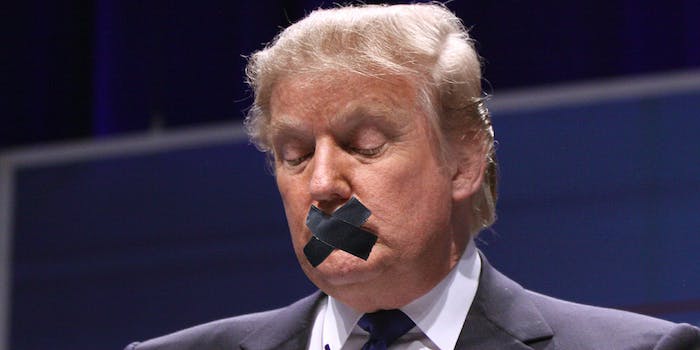 Does the Trump campaign have a point?

“Apparently, the mainstream media are champions of the First Amendment only when it serves their own political views. Faced with an ad that doesn’t fit their biased narrative, CNN, ABC, CBS, and NBC have now all chosen to block our ad,” Lara Trump, the president’s daughter-in-law, said in a statement. “This is an unprecedented act of censorship in America that should concern every freedom-loving citizen.”

Fox News, the most popular cable news channel, has not banned the ad. On Thursday, Mrs. Trump also appeared on Fox News’ Hannity, which ran the full ad during the program, where she decried CNN’s decision to not run the ad as “really sad.”

The ad in question, released on May 1, highlights what the campaign considers accomplishments during Trump’s first 100 days, which was capped off on April 29. The ad also includes a graphic calling the media “fake news,” which appears to be at the root of the controversy.

CNN was first to refuse to run the ad. In a statement, the cable news outlet rejected the claim that the mainstream media is “fake news” as factually incorrect and said it would only run the ad if that part was removed.

In response to the Donald J. Trump for President campaign’s accusations of ad censorship: pic.twitter.com/0Rbanpf0dn

Networks have the right to vet their advertisements and choose which are acceptable and which are not. Further, all the networks that banned the ad also collectively provided Trump with an estimated $2 billion in free coverage during the 2016 election season—more than any other candidate in history.

The Trump campaign originally said it planned to spend $1.5 million to air the ad in “major markets.” It will also appear online and be targeted to voters in key demographics.