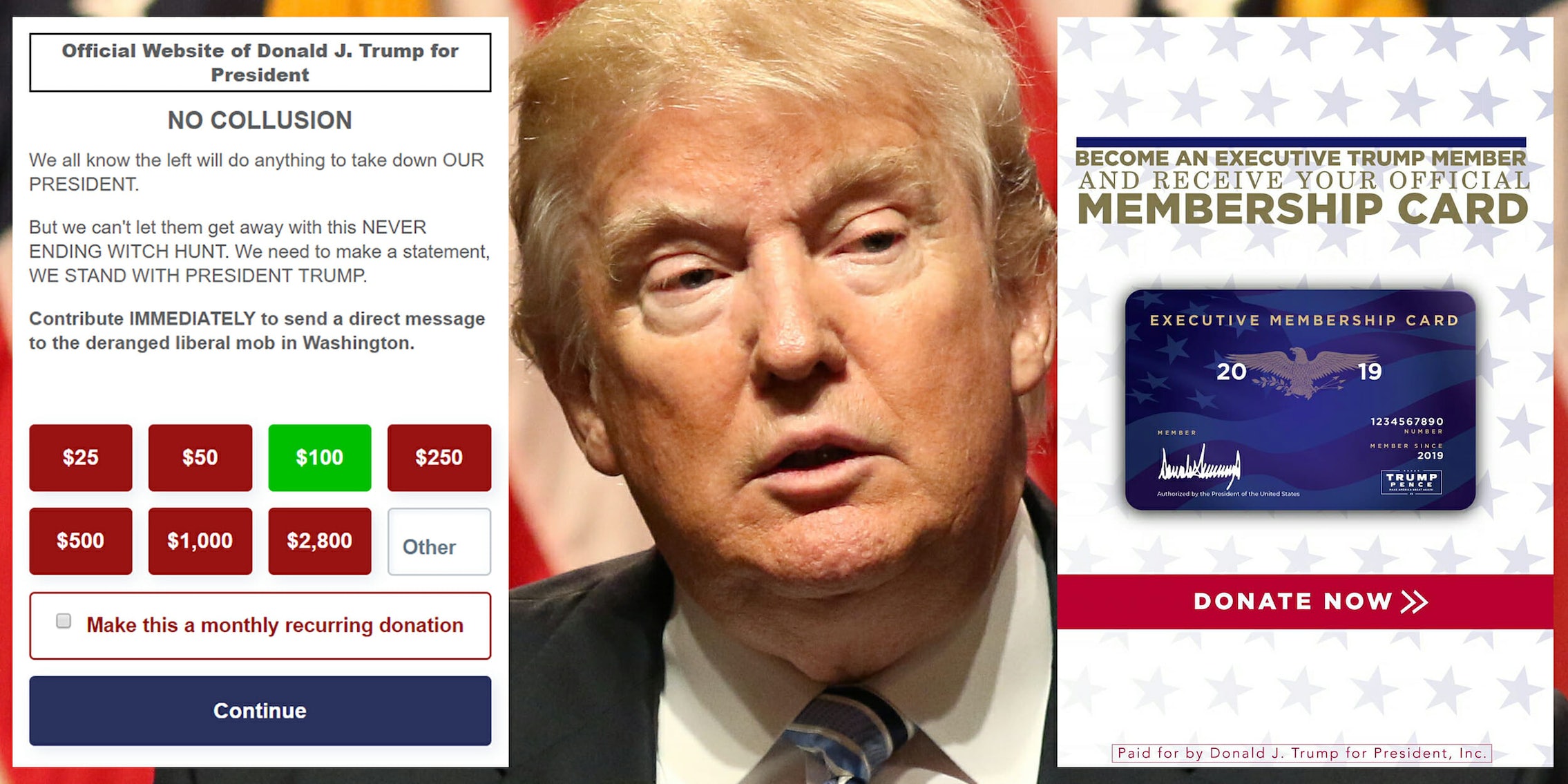 Trump is already running Facebook ads on the Mueller report

Trump didn't wait to begin campaigning on it.

When the Mueller report was released on Thursday, Donald Trump looked at it the same way as he looks at everything else unfortunate enough to pass before him—as an opportunity to make money.

In almost no time at all, the Trump campaign was fundraising off the document. The campaign blasted their spin across all possible outlets and to all possible takers

Most people got a first look at the report at around 11:05am on the East Coast. About three hours later, at exactly 2:05pm, a Trump campaign email pinged inboxes on his email list.

The president’s emails are some of the ugliest pieces you’ll see, even for political fundraising blasts. They look like you should be reading them on a computer in the mid-2000s. They’re blocky and loaded with links that all land on the exact same page.

In this email, Trump declared “The summary of the Mueller Report said there was NO COLLUSION, but you already knew that. So Democrats and the Fake News claimed the full report would tell a different story…” and added “How many times do I have to be exonerated before they stop? WHAT A JOKE!”

Finally, he set a fundraising goal for his supporters: $1 million in the next 24 hours. Here’s a screenshot of that email.

The email is peppered with a few head-scratching remarks; he writes that “this WITCH HUNT must end,” but that doesn’t make much sense because the “witch hunt” is essentially over. That’s the entire point of this email, he’s fundraising off the witch hunt report.

He also writes that he’s “only reaching out to my top supporters” but I’m a recipient of this email and I’ve never given a dime to Donald Trump or any other politician. So it’s hard to figure out what categorizes me as a “top supporter.”

The president also started fundraising immediately on Facebook, blasting out ads that read “Democrats worked with the Fake News Media for 2 years orchestrating this Nasty Witch Hunt to use our government as a weapon to take away the votes of 63 MILLION Americans.”

While the language is over-the-top, that arguably makes it stronger and more sincere. The president is an over-the-top orator and you can definitely see him unloading like this in the Rose Garden.

His Facebook ad also featured a video of Sen. Richard Blumenthal (D-Conn.) and Rep. Adam Schiff (D-Calif.) and Rep. Eric Swalwell (D-Calif.) talking about collusion and speculating about possible ties between the campaign and Russia. Surprisingly, the ad with the video is the only one that the president is running on the Mueller report on Facebook.

He didn’t spend much money on this ad, somewhere less than $100. And in the overall scheme of his campaign spending, that’s a very small figure. He’s spent almost $12 million on Facebook ads.

Meanwhile, there were plenty of Democrats trying to get in on the Mueller action and running their own ads. But they mostly seem to have gone silent since the report was released.

As recently as yesterday, Schiff was running this advertisement calling for the full release of the Mueller report with a photo of Donald Trump and Attorney General William Barr.

Schiff wasn’t the only member that we started seeing Mueller report ads from last week as the report’s release loomed. For some reason, most of these politicians seemed to be fundraising demanding the “full release of the report” despite the fact that we already knew the full release was coming out.

Trump is likely to run his campaign on the theme that he was exonerated in the Russia investigation. He’s already talking about it nonstop in rallies and on Twitter and his off-the-rails stump speeches are usually pretty similar to his online rants. Expect to see more of these in your social media feeds.

Friday also heralded what is probably the most boomer-centric advertisement that any politician has run on Facebook in a while. Trump announced that, for the first time since 2017, he was peddling “membership cards.” They look like actual credit cards except they’re worthless and they have Donald Trump’s signature on them.

Trump promises donors: “I wanted to give you this exclusive opportunity to become an Official 2019 TRUMP EXECUTIVE MEMBER and receive your PERSONALIZED membership card.”

But it’s hard to figure out how the card is PERSONALIZED since it doesn’t even bother to include the donor’s name, the only identifying factor noticeable on the cards is a “member number.”

Trump is hitting that boomer audience hard on Facebook for donations. He’s also been running ads this week asking his supporters to sign a birthday card for Melania Trump. And he was asking that donors sign the card immediately, so that your name is one of the first that she sees.

And, true to form, even Melania’s birthday proved to be a moment for some money-making in the Trump campaign. After you signed the card, you were pinged to another website where you’re asked: “please make a special contribution today to commemorate the First Lady’s birthday.”

President Trump’s campaign has said that they intend to raise a billion dollars in the run-up to the 2020 election and it looks like we’re starting to get a good idea how they’ll hit that goal: by fundraising off every possible opportunity that passes. And, as the race gets closer and more competitive, you’ll probably see them inventing opportunities to fundraise.