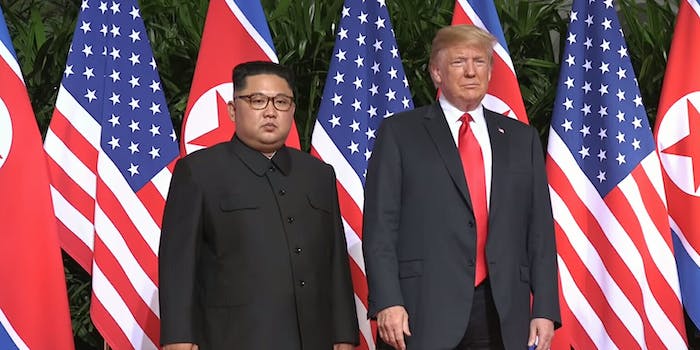 What is going on?

The president repeatedly referred to North Korea‘s dictator as “rocket man” as an insult during speeches and tweets as tensions escalated between the two countries late last year. However, now that Trump and the North Korean leader met in Singapore (and seemed to have a good time with each other), the president is reportedly in a gift giving mood.

The Chosun Ilbo, a newspaper in South Korea, reports that Trump signed a copy of an Elton John CD with the song “Rocket Man” on it and asked Pompeo to give it to him during their meeting this weekend to follow up on the agreement signed in Singapore earlier this summer.

According to the newspaper, sources say Trump asked the North Korean leader if he had ever heard John’s song from which the president seems to have gotten the nickname from. When Kim Jung-un told him he had not heard the song, he asked Pompeo to take the signed CD and a message on it for him to listen to.

NBC News notes that when asked about the gift on Friday, Pompeo laughed.

For what its worth, John didn’t seem thrilled with Trump using his music during the 2016 presidential election.

The singer didn’t mince words when he spoke with The Guardian about his music being used:

“I don’t really want my music to be involved in anything to do with an American election campaign. I’m British,” he told the news outlet. “I’ve met Donald Trump, he was very nice to me, it’s nothing personal, his political views are his own, mine are very different, I’m not a Republican in a million years. Why not ask Ted fucking Nugent? Or one of those fucking country stars? They’ll do it for you.”

You can read all of The Chosun Ilbo‘s report here.