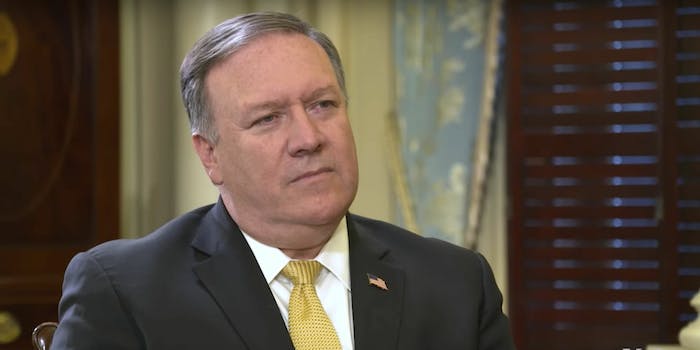 Pompeo has expressed plenty of anti-LGBT views in the past.

June is now the official Pride Month, and while President Donald Trump has stayed quiet on recognizing this, the secretary of state has not.

Secretary of State Mike Pompeo issued a statement on the State Department’s website on the first day of the month, recognizing “LGBTI Pride Month.” Pompeo wished the community a safe and happy Pride Month while saying the country stands “firmly” with these persons as they exercise their “human rights and fundamental freedoms.”

Pompeo said these freedoms include freedom of expression, peaceful assembly, and association, without fear of reprisal.

“As Americans, we place a high value on these rights and freedoms, which all persons deserve to enjoy fully and equally,” Pompeo said, according to the press release.

The press release is a surprise, as Pompeo has expressed anti-LGBT views in the past. Pompeo once suggested homosexuality is a “perversion” and said he doesn’t believe same-sex couples should be treated the same as heterosexual ones, Huffington Post reports. Pompeo put out a statement three years ago on Facebook, calling the Supreme Court’s decision to legalize same-sex marriage a “shocking abuse of power.”

The public is a little more than outraged at the fact that Trump will not recognize the month. But many question whether recognizing the month is valid if the announcement is not authentic.

In May, Trump and Pence recognized National Physical Fitness and Sports Month.

And yet, they still refuse to recognize #Pride month for #LGBTQ Americans. Why are Trump and Pence so insistent on erasing us?

I remain convinced that every time they do something like this, it is very clearly meant as mockery.

Others are confused at Pompeo’s mention of “LGBTI.”

I’m gay but have never heard of “LGBTI”.

According to Time magazine, the “I” in “LBGTI” stands for Intersex, which is a term referring to someone “whose anatomy or genetics at birth do not correspond to the typical expectations for either sex.”

It is unclear why Pompeo chose that specific acronym to identify the community or why he decided to release the announcement in the first place, given his record. Some have taken to Twitter to argue whether Pompeo can be supportive of someone’s rights while opposing their lifestyle.

The press release has garnered much attention, but all remains quiet on the Trump front regarding any true backbone of support for the Pride community.