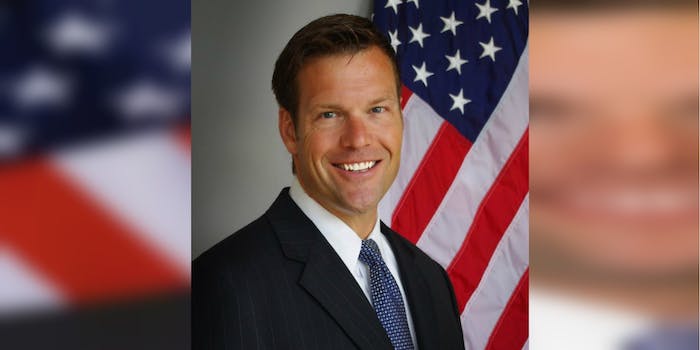 President Donald Trump named Kansas Secretary of State Kris Kobach as vice chairman of his new Commission on Election Integrity on Thursday, an appointment that has infuriated both Democratic politicians and civil rights groups.

The bipartisan commission, led by Vice President Mike Pence and established via an executive order, will investigate Trump’s unsubstantiated claims that widespread voter fraud and suppression deprived him of winning the popular vote against Democrat Hillary Clinton in the 2016 presidential election, including his losses in California, New Hampshire, and Virginia.

The American Civil Liberties Union has successfully sued Kobach on four previous occasions for voter suppression. He is known for implementing Kansas’ strict proof-of-citizenship voting law, which required individuals to provide birth certificates or passports to register. The civil rights organization says that in doing so Kobach “disenfranchised tens of thousands of Kansans.”

Kris Kobach, vice chair of "Election Integrity" commission, has been sued by the ACLU for voter suppression 4 times.

The ACLU has now raised a legal challenge against Trump’s directive creating the commission and has submitted a Freedom of Information Act (FOIA) request demanding the administration release evidence it has to justify reviewing the “widely debunked” allegation of widespread voter fraud.

“[Trump] is still trying to push his false reality on the American public,” said Dale Ho, director of the ACLU’s Voting Rights Project. “If the Trump administration really cares about election integrity, it will divulge its supposed evidence before embarking on this commission boondoggle.”

Another core objection to the panel comes against Kobach, whom Senate Minority Leader Chuck Schumer (D-N.Y.) dismissed as “an extremist.”

“Putting an extremist like Mr. Kobach at the helm of this commission is akin to putting an arsonist in charge of the fire department,” he said.

Ho agrees: “It is telling that the president’s choice to co-lead the commission is none other than Kris Kobach, one of the worst offenders of voter suppression in the nation today.”

Kobach, for his part, claims that the commission had not been put in place to validate the president’s allegations of voter fraud but would instead “go where the facts lead.”