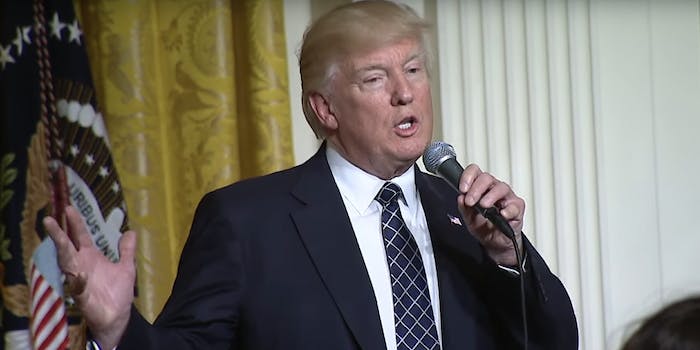 The Philippines president's handling of his country's drug problem has been widely denounced.

In a recent phone call, President Donald Trump reportedly praised brutal actions taken by the Philippines to tackle its drug problem and boasted that the United States had two submarines in the waters near North Korea.

The New York Times reported that during an April 29 phone call, Trump applauded the “unbelievable job” Philippines President Rodrigo Duterte has done handling the nation’s drug problem despite the country sanctioning suspects being gunned down in the streets, according to a transcript of the call that was authenticated by the Times.

Trump also told the president that the United States has “two submarines—the best in the world” off the coast of North Korea in an attempt to reassure Duterte, who expressed that the Philippines would never be safe with North Korean dictator Kim Jong-un in power.

“We have two nuclear submarines, not that we want to use them at all,” Trump reportedly told Duterte.

Trump called to congratulate Duterte for his handling of the country’s drug problem by using government-sanctioned attacks on suspects, the newspaper reported. The program has been assailed by human rights groups.

The State Department also criticized the program, calling it an “apparent governmental disregard for human rights and due process,” according to the Times.

“I just wanted to congratulate you because I am hearing of the unbelievable job on the drug problem,” Trump reportedly told Duterte. “Many countries have the problem, we have a problem, but what a great job you are doing and I just wanted to call and tell you that.”

As for North Korea, Duterte told Trump “as long as those rockets and warheads are in the hands of Kim Jong-un we will never be safe,” according to the report.

Trump downplayed North Korea’s ability to launch missiles, the Times reported, before boasting about the submarines.

Trump ended the conversation by inviting the controversial Philippines leader to the Oval Office “anytime” he wanted to come.