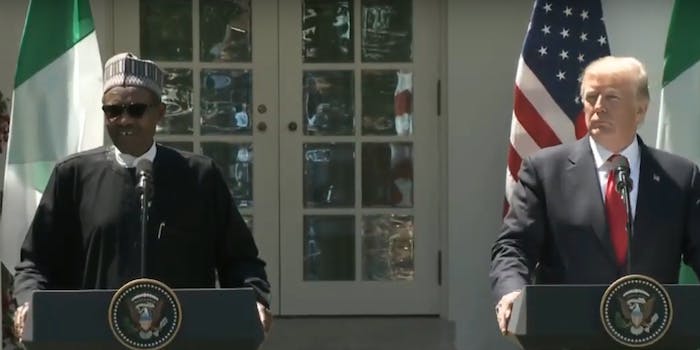 President Donald Trump jumped into a question directed at Nigerian President Muhammadu Buhari during a White House press conference on Monday about his alleged description of African nations as “shithole countries.”

“President Buhari, I want to ask you—you’re the first leader from sub-Saharan Africa to visit President Trump here at the White House,” a reporter asked. “Did you address his reported comments from earlier this year when he reportedly used vulgar language to describe African nations?”

“Well, um, I’m very careful what the press says about other than myself. I’m not sure about, you know, the validity or whether that allegation against the president is true or not. So the best thing is for me to keep quiet,” the visiting world leader began to respond.

The uncomfortable question refers to reports about a meeting between the president and a group of senators to discuss immigration. During that conversation, in reference to Haiti and several African countries, Trump allegedly asked out loud why the U.S. accepted “all these people from shithole countries?”

The language used by me at the DACA meeting was tough, but this was not the language used. What was really tough was the outlandish proposal made – a big setback for DACA!

In similar immigration-related comments allegedly made last year, also denied by the White House, the president reportedly said that Nigerians visitors to the U.S. would never “go back to their huts” in Africa.

The White House had hoped that meeting with African leaders would work to undo the negative impact of the reported comments, which had incensed Nigerian leaders enough to demand an explanation from the U.S. ambassador.

Trump appeared keen to acquire investment and trade opportunities with Nigeria, which has been the focus of substantial investment from China.

“We have many things that we do together, as you know, especially on terrorism, terrorism-related,” Trump said at the press conference in reference to Boko Haram jihadists. “It’s a hotbed, and we’re going to be stopping that.”

“Part of the problem is you weren’t allowed to buy helicopters in our country and now you are. I worked that out,” he continued of his recent sale of aircraft to Nigeria. “They weren’t allowed to buy the helicopters in our country for various reasons. They weren’t good reasons. We make the best military equipment in the world. And our friends can now buy that equipment.”