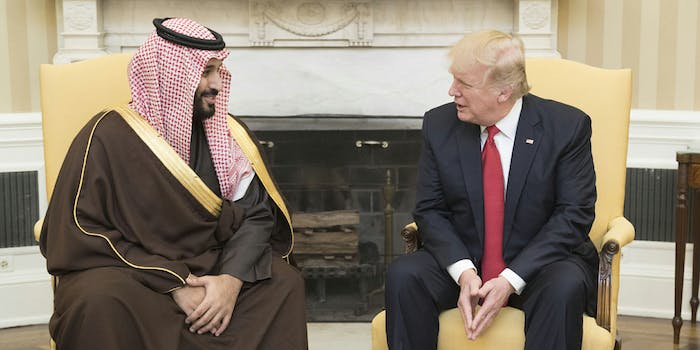 You should be worried about this as well.

As Robert Muller’s investigation continues to broaden, the scope of it has expanded to include countries with problems that many have long felt trump issues with Russia: Saudi Arabia and the United Arab Emirates (UAE). While Russian collusion efforts and connections between the country’s oligarchs and Trump-related businesses are not small things, the connection between these Middle Eastern countries and the Trump administration could have more damning consequences for the United States, including war.

The New York Times reported that a cooperating witness is now assisting Muller’s investigation in that regard. George Nader, a former adviser to the president, has been granted immunity in Muller’s investigation to cooperate. Now, the special counsel is looking for information regarding how the rulers of Saudi Arabia and the UAE attempted to gain influence with the White House, and just how much they succeeded.

So far, we know that these governments have achieved several items high on their agenda. Both countries wanted Rex Tillerson out as secretary of state. Both countries have wanted to heighten tensions between the United States and the countries likes Iran, Yemen, and Qatar. Objectively, they have gotten their wish, with the help of several men who have gained influence in the Trump White House, including Nader, who is an adviser to U.A.E. leaders, and Elliot Broidy, an RNC employee.

The influence of these two men in the administration has been shown in other concrete ways. Ann Peterson, a former ambassador to Cairo, was denied a top Pentagon position because of their lobbying. She had been a long time critic of the Emiratis and Saudis.

Saudi Arabia and the UAE have a reach into the White House that goes beyond just the cloak and dagger machinations of Broidy and Nader. There was a lot of coverage around Jared Kushner’s meeting with Saudi crown prince Mohammed bin Salman just before Salman launched a “soft coup,” jailing dozens of family members political opponents.

The coup, launched in early November, saw the imprisonment of MBS’s opponents, including television station owners, the head of Saudi’s military, and some of the country’s wealthiest citizens. The names of some who were jailed appeared on a classified briefing which Kushner had access to, leading to speculation that he offered some names to the crown prince. Those captured in the round-up have had billions of dollars in assets seized, and some have been killed.

According to a report by the Intercept, the connection goes deeper than just that meeting. The article alleges that MBS has boasted that he has Jared Kushner “in his pocket.” This is incredibly troubling because Kushner has been tasked with handling the delicate Israeli-Palestinian peace process, a situation in which both the UAE and Saudi Arabia, as Arab nations, have an immense stake.

Even more troubling is the cavalier nature Kushner seems to be using to communicate: he has taken to texting with UAE and Saudi royals on WhatsApp.

All of this would be kind of funny if it weren’t so dangerous. The UAE and Saudi Arabia have been conducting both economic and physical confrontations with regional neighbors Yemen and Qatar. Conflicts in the Middle East aren’t exactly something America should be getting into lightly.

Kushner, however, has not only thrust himself into these conflicts, but tried to leverage them for personal financial gain. It’s no secret that Kushner’s company is under water to the tune of over $1 billion on the 666 5th Avenue property in Manhattan.

Apparently, he has grown so desperate to try to get himself back afloat that he tried to force Qatari investors to jump onboard. When they refused, he deepened his relationship with their enemies. Kushner may have even thrown his support for a Qatari blockade to UAE and Saudi leaders because of hard feelings following the business deal.

UAE royals are also in business with Trump: he has one Emirati golf course and another on the way. Trump, like his son-in-law, has attempted to do business with Qataris, but has been rebuffed. Now that two of his business partners are feuding with a country that rejected him, it’s hard not to see a conflict of interest here as well.

This cozy relationship between Trump and these countries continues to this day, as officials from Saudi Arabia have spent hundreds of thousands of dollars at his properties since his inauguration.

Relationships like these between American officials and leaders of another country would be conflicts of interest no matter what. But, given the terrible human rights record and authoritarian governance of both countries, these seem like particularly bad partners for executive sweetheart deals.

In terms of immediate importance, not only do these countries have sharp biases regarding our current challenges in the region, which include Israel, Iran, Iraq, and Afghanistan, these two countries are waging one war and on the brink of starting another.

Currently, the United States supports Saudi Arabia in their war against Yemen. A minority coalition of U.S. senators attempted to end this support this week, and were stopped by a bipartisan coalition in favor of continuing to support Saudi military devastation. Sen. Bernie Sanders (I-Vt.) summed up America’s investment in the conflict on the Senate floor, saying, “Many Americans are not aware the U.S. forces have been actively involved in support for the Saudis in this war, providing intelligence and aerial refuelling of planes, who bombs have killed thousands of people and made this crisis far worse.”

While the U.N. has condemned the conflict, it is hard to see what benefits United States citizens are receiving from the U.S. funding the war.

Saudi and the UAE aren’t content to stop there. They nearly invaded Qatar last summer in a move that would have, again, expanded the power of these two countries without any immediately recognizable benefit for the United States. Though the countries ultimately stopped short of invasion, they also have considered regime change and have instituted economic sanctions against the nation.

A shift in policy is not likely coming any time soon. It was announced on Friday that the United States had made yet another arms deal with Saudi Arabia, this time totaling $1 billion. These arms will be almost certainly be used against outgunned Yemenis, including many civilians, and potentially Qataris as well.

While it is likely that the Trump administration and their associates will continually try to enrich themselves with the help of foreign leaders, there are 195 countries in the world, so perhaps, at least, they could pick one that won’t lead America into a broader endless war and into bed with some of the worst human rights abusers on the face of the Earth.

Because while Russia’s impact on our election is a big deal, the potential consequences of the Trump alliance with Saudi and UAE royals could have disastrous consequences.