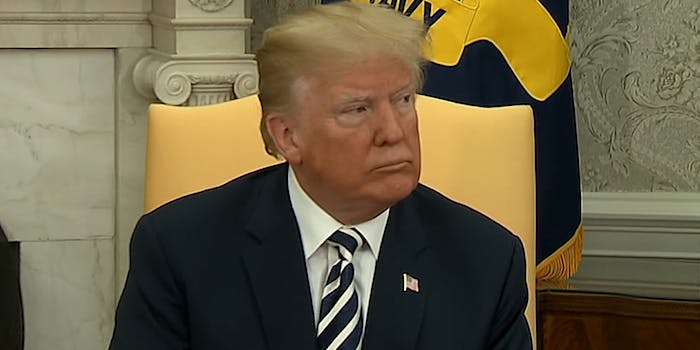 He didn't want to answer that.

When a reporter paused during an Oval Office meeting to ask whether President Donald Trump would pardon Michael Cohen if his lawyer is charged with a crime, Trump moved on immediately with the simple response of “stupid question.”

Trump hosted French President Emmanuel Macron on Tuesday and spoke extensively on the Iran deal, saying it was a “terrible deal” that should have “never ever been made.” Things got awkward for Macron though when someone brought up Cohen.

A reporter asked Trump if he would pardon Michael Cohen and he snapped back, "Stupid question."

The question, asked by ABC News White House correspondent Jonathan Karl, was most likely triggered by the criminal investigation Cohen is under for potential bank fraud and campaign finance violations. Cohen’s office was raided by the FBI in early April.

Investigators are seeking evidence on Cohen concerning crimes, “many of which have nothing to do with his work as an attorney” and more to do with “Cohen’s own business dealings,” Fortune reports.