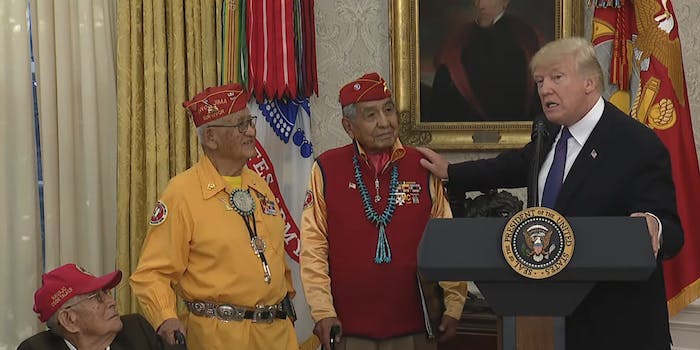 He did it in front of a portrait of Andrew Jackson.

The Code Talkers used their native tongue to help circumvent enemies during World War I and World War II. After letting the president of the Code Talkers speak about their accomplishments, Trump first said he would no longer give his prepared remarks because the ones before him were “incredible.”

However, soon enough Trump began talking and brought up his “Pocahontas” nickname for Warren in front of the three men being honored. The entire ceremony was held beneath a large portrait of former President Andrew Jackson, whose policies forced Native Americans from their homes, an atrocity in the mid-1800s known as “Trail of Tears.”

“I just want to thank you. You’ve very, very special people. You were here long before any of us were here,” he said before pausing for a moment. “Although we have a representative in Congress who they say was here a long time ago. They call her ‘Pocahontas.’ But you know what? I like you, because you are special. You are special people. You are really incredible people.”

Besides Trump making the “Pocahontas” comments—something he’s called Warren on numerous occasions as an insult—the president also called Chief of Staff John Kelly, “the chief and the general.” While it’s likely Trump was referring to Kelly’s title of “chief of staff,” the context in which Trump made the comments is hard to excuse.

Update 2:47pm CT, Nov. 27: White House Press Secretary Sarah Huckabee Sanders said she found the notion that “Pocahontas” was a racial slur a “ridiculous response” when asked shortly after at her daily briefing.

“I think what most people find offensive is Sen. Warren lying about her heritage to advance her career,” Sanders said, later adding: “I think the president certainly finds an extreme amount of value and respect for these individuals. Which is why he brought them and invited them to come to the White House and spent time with them, recognizing them and honoring them today.”

When asked by a reporter why it was appropriate for Trump to “use a racial slur in any context,” Sanders continued.