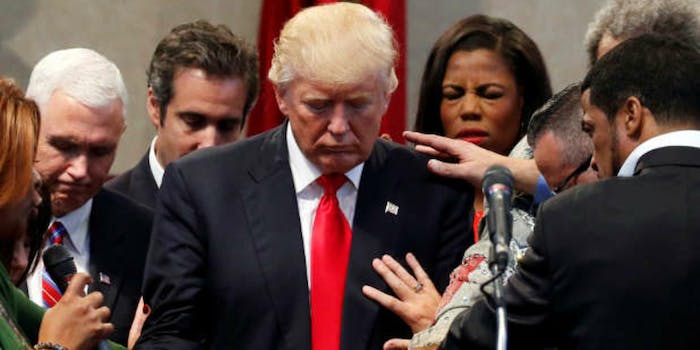 Not only did the president order the creation of a new faith-based advisory council but he also took credit for saving Christmas and making society more godly as a whole.

Then, appearing to break script, Trump claimed that his administration could be credited with opening religious liberty up so much that Americans were, once again, acknowledging Christian holidays like Christmas and exalting God’s place above the nation.

“[Prayer] uplifts the soul, inspires action, and unites us all as one nation, under God. So important. And we say it here, ya know?” Trump told the attendees.

“Lot of people, they don’t say it. But, you know what, they’re starting to say it more, just like we’re starting to say ‘Merry Christmas’ when that day comes around. You notice the big difference between now and two or three years ago, it was, all, it was going in the other direction rapidly, right? Now it’s straight up.”

The phrase “one nation under God” has been in common use since its introduction by Congress in 1954 and there is little proof that, before Trump turned up, Christmas was being banned in the name of political correctness.

The comment is a clear shot at his Democrat predecessor President Barack Obama, affirming a narrative on among religious conservatives that under Obama’s “hostile” liberal secularism, American Christianity suffered.

Obama was open about his broad religious convictions prior to bbeingelected, unable and unwilling to casually court the conservative evangelical establishment in the way Trump did on Thursday, and refusing to be pigeonholed on the basis of his somewhat complicated personal faith.

When first winning the presidency, Obama didn’t win a majority of evangelicals in any state and despite the fact that Obama launched his own faith-based initiative while president, like Republican presidents before and after him, he continued to be seen as untrustworthy by the religious right throughout his tenure.

Trump’s executive order on Thursday to commission the creation of the White House Faith and Opportunity Initiative, however, goes further to particularly appease evangelical fears that their religious liberty is under threat.

The new initiative will flag “any failures of the executive branch to comply with religious liberty protections under law” according to a release from the White House.

Spokesman for Trump's faith advisors says the difference is this faith office isn't as focused on "where the church-state barriers are" and thinks govt-religion partnerships should focus on effective programs "without all of these arbitrary concerns as to what is appropriate" https://t.co/BcawYZDIoi

The announcement seemed to appease for conservative evangelicals, who hailed it as “a historic action, strengthening the relationship between faith and government.”

Certain evangelical leaders have been willing to overlook Trump’s adulterous past, even comparatively citing the biblical King David who murdered a man to steal his wife in the president’s defense.

Now, as he continues to align himself with their political positions, Trump might consolidate in the religious right a support base even in the face of looming public scandal.