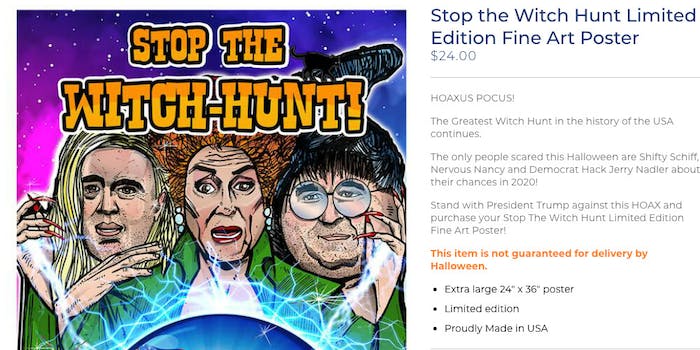 'Everyone knows that 'witch hunt' does NOT mean the witches were DOING the hunting, yes?'

President Donald Trump’s reelection campaign is selling Hocus Pocus-inspired merchandise. While the merchandise is not guaranteed to be shipped to purchasers by Halloween time, it does guarantee that the Trump campaign doesn’t really understand the concept of a witch hunt.

The merch includes a poster featuring the likes of House Speaker Nancy Pelosi (D-Calif.), Rep. Adam Schiff, (D-Calif.), and House Judiciary Committee Chairman Jerry Nadler (D-N.Y.) as the three witches from the movie and can also be bought emblazoned on a T-shirt.

“Just in time for Halloween! ‘STOP THE WITCH HUNT’ @realDonaldTrump merchandise. Send a spooky message to Pelosi, Schiff & Nadler that Trump won and they should get over it! And show support for the President at the same time! Limited run, order today!” the Trump campaign’s official account tweeted.

Just in time for Halloween!

Send a spooky message to Pelosi, Schiff & Nadler that Trump won and they should get over it!

And show support for the President at the same time!

In response to the news, many were at a loss for words and pointed out that witches were the ones being hunted in reference to the term “witch hunt,” which comes from the persecution of (mostly) women believed to be practicing witchcraft. The Salem witch trials, wherein 20 people were executed in the 1600s, is one example of a witch hunt.

“Everyone knows that ‘witch hunt’ does NOT mean the witches were DOING the hunting, yes?” Twitter user @ricsanchez wrote.

not the point, but everyone knows that "witch hunt" does NOT mean the witches were DOING the hunting, yes? https://t.co/CHGMyhUVp3

Others wondered if the Trump campaign considered the possibility of a lawsuit from Disney.

Imagine the Disney lawyers debating whether to sue the Trump campaign over this blatant Hocus Pocus ripoff https://t.co/0HKLWVeC4Q

Some even decided to call upon the head witch in charge herself, Bette Midler, who played Winifred Sanderson in the movie and notoriously hates Trump, hoping she could cast a spell to make Trump go away.

“Suck the life out of Trump,” Twitter user @LeeLoveridge 13 ordered.

1. Suck the life out of Trump.
2. Get on that green robe because we need you in Hocus Pocus 2! C'mon Sistaahhh!

(P.s..Hocus Pocus is my favourite film and I can't wait to see 2, ur deh best)

“Trump's latest merch is a bad rip off of the legendary 'Hocus Pocus' poster.”This is so not ok. Wish these witches were real so they could cast a spell to get rid of this crook. ⁦@SJP_Daily⁩ ⁦@kathynajimy⁩ ⁦@BetteMidler⁩ https://t.co/8QXwyCU7aT

@BetteMidler how are we feeling about this atrocity? Can’t someone sue for this bullshit?https://t.co/xygrQACHcK