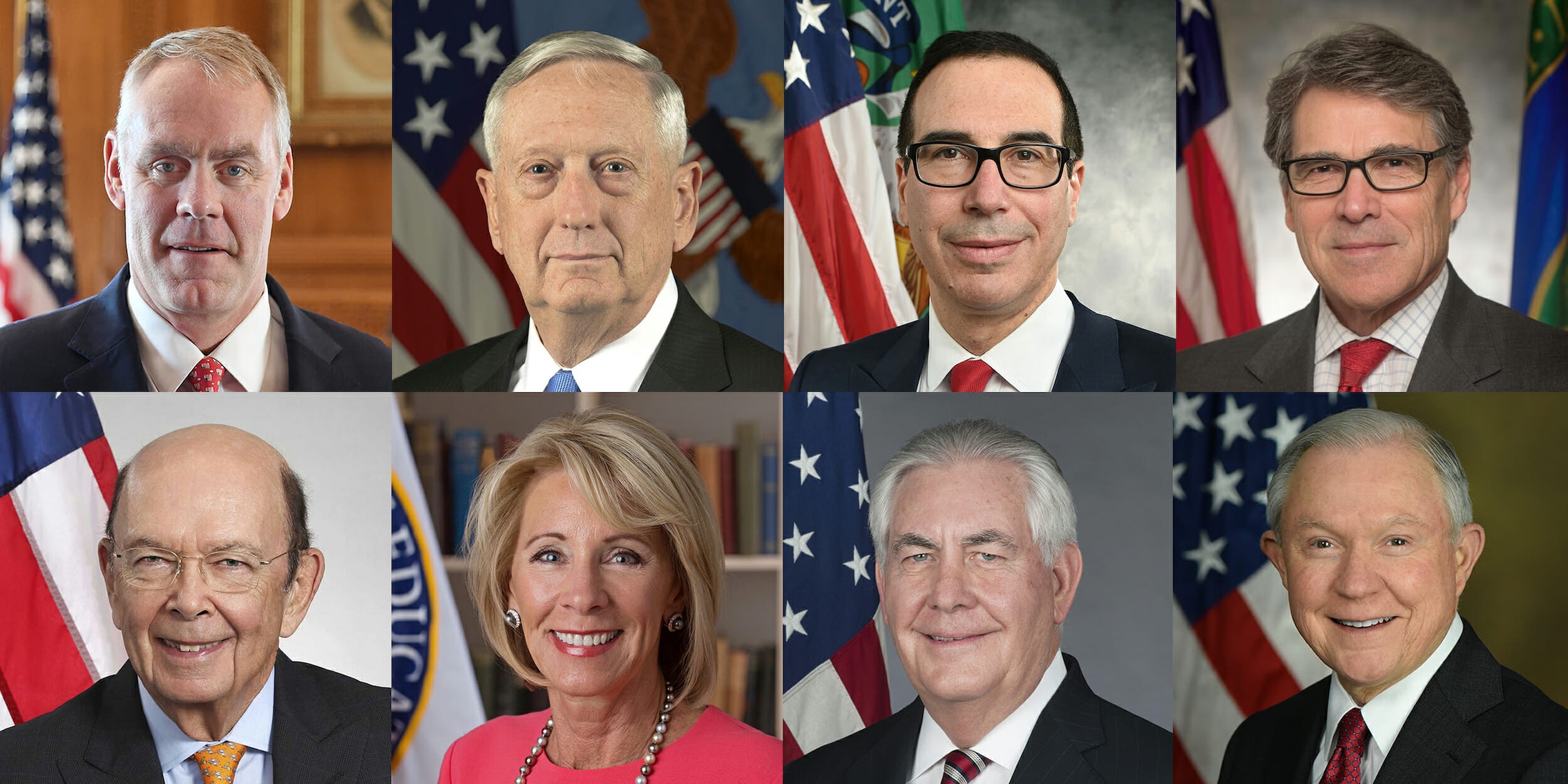 Photos via US Government (Public Domain) Remix by Jason Reed

How much does it cost for Trump Cabinet members to travel? We’re about to find out.

Earlier this year, several Cabinet secretaries came under fire for using private or government aircraft for business travel. Steve Mnuchin, the Treasury secretary, used a private plane to go to Fort Knox, Kentucky, where he attended a meeting and watched the eclipse.

Transportation Secretary Elaine Chao (who is also the wife of Senate Majority Leader Mitch McConnell) took government planes seven times this year. Interior Secretary Ryan Zinke spent $12,000 on a private plane so that he could go to an event hosted by a campaign benefactor.

Then, of course, there’s Tom Price, who left his position in September following revelations that he spent hundreds of thousands of dollars on private air travel during his tenure as head of the Department of Health and Human Services.

While it’s not illegal for high-level government officials to use private or government aircraft, it’s certainly frowned upon. Most Cabinet secretaries, with the exception of the secretary of state, as well as members of Congress and high-ranking military personnel, fly commercial unless there is no way they can get where they need to go in the timeframe they need to be there—or if they need to access secure communications while traveling or other security concerns. Price took private planes 24 times between May and September, putting his domestic travel expenses over $400,000, according to Politico. His international travel on military aircraft put the total bill for his travel around $1 million.

Price pledged to pay the department back for his seat on the domestic flights, but that figure adds up to only $51,887. While no other secretaries have chartered flights to the extent that Price did, it’s important to keep in mind that federal funds pay for their travel, and these officials have a responsibility to use that money judiciously.

In the interest of transparency, the Daily Dot has requested the travel records for all military and private chartered travel request for all Cabinet secretaries through the Freedom of Information Act (FOIA).

Treasury Secretary Steven Mnuchin’s travel habits set off a flurry of reporting when he and his wife, Louise Linton, requested government travel to view the solar eclipse in Fort Knox, Kentucky, last year. Further reporting by the New York Times, the Washington Post, and Politico, among others, found that Mnuchin’s travel had cost taxpayers $1 million by the spring of 2018.

On June 1, The Daily Dot received travel records from the Treasury Department. The request was originally filed September 27, 2017.

You can review the full documentation of Mnuchin’s requested and approved travel at the links below.

The Daily Dot received a portion of Secretary of Housing and Urban Development (HUD) Secretary Ben Carson’s travel records in March. While some of his lavish expenditures have been criticized, such as the purchase of a $31,000 dining set for his HUD office, it appears that Carson has been adhering to the travel guidelines set out for government employees, only traveling coach to his destinations.

From March to September of 2017, Carson traveled to St. Louis, M.O., Charlotte, N.C., Polson, M.T., Detroit, M.I. and New Orleans, L.A., among other locations, to speak with government officials and tour HUD housing.

Last year the Daily Dot requested records regarding Carson’s military air travel or private chartered planes. HUD said there were no records responsive to the request.

Ben Carson Travel Record by The Daily Dot on Scribd

Pruitt often travels first-class, as he did on a trip to New York City last June, costing taxpayers $1,641.43. Other trips, like one on a military jet from New York to Cincinnati, cost $7,003.52 for Pruitt alone.

Pruitt has also come under fire for requesting a $43,000 soundproof phone booth in his office, and for renting a DC condo from a lobbyist for well below market rate.

You can see the full records here.

The Department of Veterans Affairs released Secretary David Shulkin’s travel records to The Daily Dot on December 12, 2017. The records were extensive, detailing not only the cost of each trip, but the day’s schedule—even down to an event’s dress code.

While Shulkin’s records don’t show the extravagant spending of former HHS Secretary Tom Price, they do give us a window into his priorities and how he spends his time.

Shulkin’s most expensive trip was to Europe from July 10-21, 2017. He traveled to London and Copenhagen to visit a home for veterans and learn about healthcare and mental healthcare. During the trip, Shulkin sat in on a number of panels including information about alternative therapies for PTSD, like marijuana use and therapy animals, and visited facilities in both the United Kingdom and Denmark. The trip cost taxpayers $15,216.07.

Shulkin, who was appointed by former President Barack Obama to be undersecretary of Veteran Affairs before being nominated by Trump to lead the agency, also accompanied the president aboard Air Force One to Harrisburg, P.A., where he participated in a rally to celebrate Trump’s first 100 days in office.

In August, Shulkin attended an event with the Milken Institute in Southampton, NY. The institute is, “a nonprofit, nonpartisan think tank determined to increase global prosperity by advancing collaborative solutions that widen access to capital, create jobs and improve Health,” according to its website, and explores topics as diverse as geopolitics and aging. Shulkin sat on a panel about veterans’ health, specifically a partnership between the VA and the Prostate Cancer Foundation to benefit vets with prostate cancer.

According to the travel documents, the dress code for the weekend was “resort casual,” with the exception of a few events, which required a jacket.

The records also tell us more about the agency itself. Most FOIA departments report significant backlogs, and records can take months or years to come back to requesters. The VA said their FOIA department was severely understaffed, which resulted in oddly, or at least inconsistently, redacted documents.

For example, some records had drive times between locations redacted; others didn’t.

That covers most names on the on the documents, including the name of a military service dog who participated in a Military Day meet-and-greet.

Other redacted information could easily be Googled. For example, on September 14, 2017, Shulkin attended a baseball game in Cleveland, OH, where he participated in a meet-and-greet with pitcher Corey Kluber. Kluber’s name was redacted, but his team, position and jersey number weren’t.

And large swathes of information about the Milken event were redacted, but the full agenda is available online.

The Washington Post reported that Shulkin’s Chief of Staff Vivieca Wright Simpson doctored an email from an aide to state that Shulkin was receiving an award from the Danish government. Wright Simpson made the false statement to justify the VA paying more than $4,300 for Shulkin’s wife to go on a 10-day European trip in July of 2017.

The trip appears in the documents released to The Daily Dot, but the Inspector General’s investigation reveals details not included in the travel itineraries. The investigation also asserts that Shulkin improperly accepted tickets to the Wimbledon tennis tournament.

Shulkin reimbursed the government for his wife’s travel and has stated that he will repay the cost of the Wimbledon tickets. He has also denied unethical behavior, stating that the investigation “reeks of an agenda.”

You can view all of Shulkin’s travel records below.

The records obtained through FOIA show that Rep. Lighthizer’s office spent $44,841.92 total (including per diems and hotels) on five trips abroad between May and September of this year. In some cases, Rep. Lighthizer requested business or first-class accommodations, rather than coach. For travel to Ottawa, Canada, to attend NAFTA talks, Lighthizer was approved for first-class travel, since he would need “sufficient time and space to prepare appropriate comments, actions (discussion points, etc.) and subsequent debriefings on the return that a coach seating will not accommodate,” according to the records.

Secretary Acosta’s travel records show a few instances of government aircraft usage, on the first page of the document below. Many of the instances show the secretary riding on Air Force One with President Trump, or on Air Force Two with Vice President Mike Pence.

In response to a FOIA request by the Daily Dot, the USDA released records of Perdue’s travel from April-December 2017.

Editor’s note: We will update this article as more departments respond to our FOIA requests.