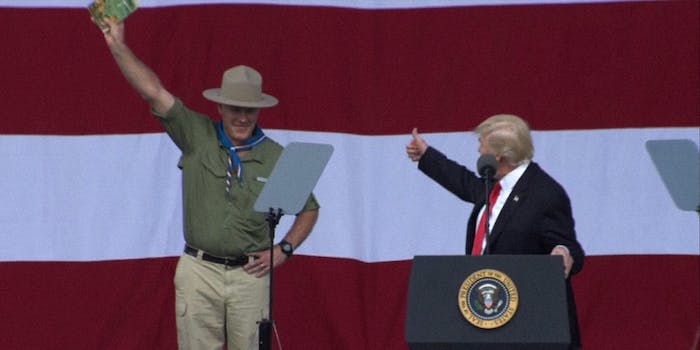 In a bizarre speech in West Virginia on Monday, President Donald Trump told thousands of Boy Scouts that he didn’t want to talk about politics before he began talking about politics.

Trump, speaking at the 2017 National Scout Jamboree on Monday, apparently veered off script when speaking to nearly 40,000 people who gathered for the event during a 35-minute speech where he blasted Congress’ efforts to repeal and replace the Affordable Care Act, his election victory, “fake news,” and of course, former President Barack Obama and Hillary Clinton.

“Who the hell wants to speak about politics when I’m in front of the Boy Scouts?” Trump said, according to various media accounts, before talking about politics and eliciting cheers from the crowd of around 40,000 Boy Scouts, ages 12 to 18.

Trump began lamenting to the crowd about the so-far failed attempts by Congress to repeal (or repeal and replace) the Affordable Care Act by threatening to fire a member of his cabinet, Health and Human Services Secretary Tom Price.

Before blasting another member of his cabinet (something he has taken a liking to in recent days), Trump got the crowd to chant “USA, USA, USA!” when talking about “killing” the Affordable Care Act.

Trump then pivoted to “fake news” and claiming that the media would misrepresent the size of the crowd that gathered at the Jamboree.

“The fake media will say… ‘President Trump spoke before a small crowd of Boy Scouts today.’ That is some crowd. Fake media, fake news,” Trump said.

No Trump speech is complete without criticizing Obama and Clinton–and Monday’s speech before the Boy Scouts was no different.

“By the way, just a question, did President Obama ever come to a jamboree?” Trump asked, waving his arms as the audience shouted “no.” “And we’ll be back. We’ll be back.”

While Obama didn’t attend the 2010 Jamboree, he did send the scouts a video message. Further, he was a Boy Scout, unlike Trump, according to the Daily Beast.

Here are some of the other notable moments from Trump’s speech:

Trump, out of nowhere, joins the “War on Christmas” brigade:

“In the Scout Oath, you pledge on your honor to do your best and to do your duty to God and your country. And by the way, under the Trump administration, you’ll be saying ‘Merry Christmas’ again when you go shopping. Believe me. Merry Christmas.”

Trump slams the “dishonest people” who doubted he could win.

“Now with that, I have to tell you our economy is doing great. Our stock market has picked up—since the election November 8. Do we remember that date? Was that a beautiful date? What a date. Do you remember that famous night on television, November 8, where they said—these dishonest people—where they said there is no path to victory for Donald Trump? They forgot about the forgotten people. By the way, they’re not forgetting about the forgotten people anymore. They’re going crazy trying to figure it out. But I told them, far too late. It’s far too late.”

“But do you remember that incredible night with the maps and the Republicans are red and the Democrats are blue, and that map was so red, it was unbelievable, and they didn’t know what to say?”

Trump details how he won the election:

“And you know we have a tremendous disadvantage in the Electoral College—popular vote is much easier. Because New York, California, Illinois—you have to practically run the East Coast. And we did. We won Florida. We won South Carolina. We won North Carolina. We won Pennsylvania.

We won and won. So when they said there is no way to victory, there is no way to 270, I went to Maine four times because it’s one vote, and we won. But we won—one vote. I went there because I kept hearing we’re at 269. But then Wisconsin came in. Many, many years—Michigan came in. And we worked hard there.”

Trump thanks the crowd of mostly children for voting for him:

“And we go to Wisconsin—now, Wisconsin hadn’t been won in many, many years by a Republican. But we go to Wisconsin, and we had tremendous crowds. And I’d leave these massive crowds. I’d say, why are we going to lose this state? The polls—that’s also fake news. They’re fake polls. But the polls are saying—but we won Wisconsin.”

“So I have to tell you what we did, in all fairness, this is an unbelievable tribute to you and all of the other millions and millions of people that came out and voted for Make America Great Again.”

“So, he had a very, very interesting life, and the company that bought his company was a big conglomerate … He so badly wanted it, he got bored with this life of yachts and sailing and all of the things he did in the south of France and other places. You won’t get bored, right? You know, truthfully, you’re workers. You’ll get bored, too. Believe me. Of course, having a few good years like that isn’t so bad.”

The Boy Scouts released a statement on Tuesday morning addressing Trump’s speech, stressing that the organization, which has been under fire by critics for its inclusiveness, is “wholly-non-partisan.”

“The invitation for the sitting U.S. President to visit the National Jamboree is a long-standing tradition and is in no way an endorsement of any political party or specific policies,” the statement read, according to NBC News.

You can watch all of Trump’s remarks below: