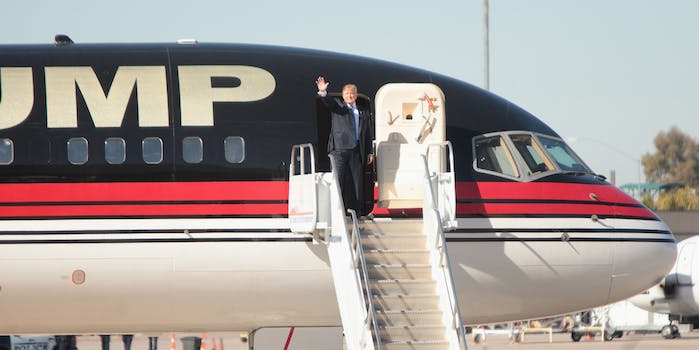 Trump wants to cancel order for new Air Force One

'Costs are out of control!'

On Tuesday morning, President-elect Donald Trump called for the cancellation of a U.S. Department of Defense contract with Boeing for the new Air Force One presidential plane, saying the cost of the deal was “out of control.”

Boeing’s stock price fell over 1 percent—one of the largest drops for companies on the Dow Jones Industrial Average—as trading opened for the day, eight minutes after Trump’s tweet. The stock remains down just under 1 percent an hour into the trading day.

In January, DoD awarded Boeing a $25.8 million initial contract for the planning and construction of the new and improved Air Force One, Reuters reported. The Air Force said it had earmarked a total of $1.65 billion for the construction of two presidential 747-8 aircraft.

Trump famously eschewed the traditional campaign bus in favor of his personal Boeing 757 airliner. Trump’s plane, however, is 71 feet shorter and 61 feet narrower than the current Air Force One aircraft, which are 747-200B series planes and include 4,000 square feet of space, two kitchens, and an onboard hospital with an operating room.