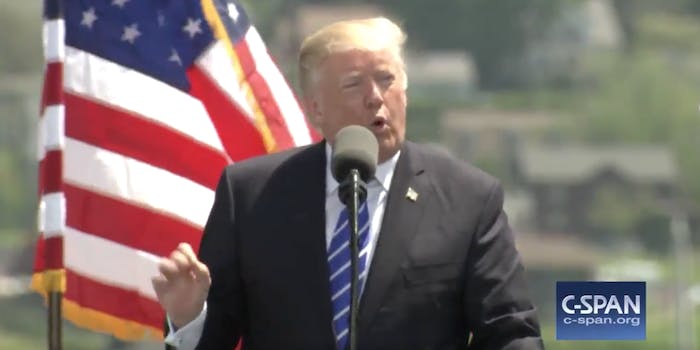 It wasn't a typical commencement speech.

The president’s remarks appeared to be in reference to the firestorm that has erupted since he surprisingly fired former FBI Director James Comey last week and the revelations on Tuesday in the New York Times that alleged Trump asked Comey to halt the investigation into former National Security Adviser Michael Flynn.

Trump also appeared to be trying to inspire the graduates.

Trump, in commencement speech for U.S. Coast Guard Academy grads, complains about how he's been treated by the media pic.twitter.com/HIPXYHi3jc

After pausing for applause from the crowd, Trump smiled and said: “I guess that’s why I won.”

Trump also told the graduates about the “tremendous amount” of things he’s accomplished since winning the election—pointing to the appointment of Supreme Court Justice Neil Gorsuch, among other things.

But Trump wasn’t done with complaining about the media.

Trump has a strong disdain for journalists. In fact, a memo by Comey allegedly says that Trump told the former FBI director that, as the Times describes it, he “should consider putting reporters in prison for publishing classified information.”