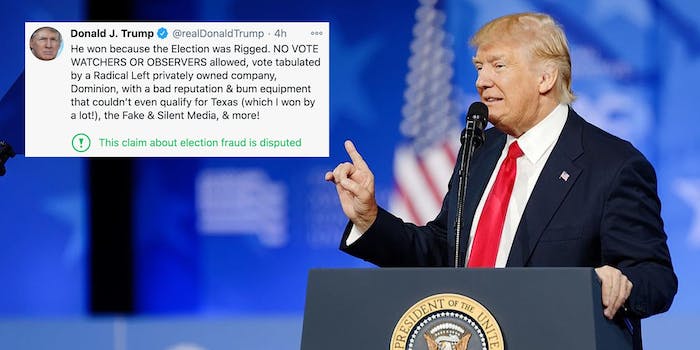 'He won because the Election was Rigged.'

President Donald Trump appeared to admit defeat for the first time on Sunday after repeatedly claiming that he had won the 2020 election.

Trump acknowledged on Twitter that President-elect Joe Biden had actually won the presidential race. But in the same tweet, he falsely claimed once again that the victory had only been secured by widespread voter fraud.

“He won because the Election was Rigged,” Trump tweeted. “NO VOTE WATCHERS OR OBSERVERS allowed, vote tabulated by a Radical Left privately owned company, Dominion, with a bad reputation & bum equipment that couldn’t even qualify for Texas (which I won by a lot!), the Fake & Silent Media, & more!”

Trump’s remark, made in a quote tweet of a clip from Fox News host Jesse Watters, was filled with misinformation.

No evidence whatsoever indicates that the election was “rigged” and the president’s own lawyers have admitted in court that Republican observers were not kept out of the election process.

Trump’s reference to Dominion Voting Systems, a company that develops election software and hardware, is also based entirely on a debunked conspiracy theory.

The president’s admission, whether intentional or not, was briefly seen by some as a step in a positive direction.

But Trump returned not long after to quash the notion that his remark was a concession. “He only won in the eyes of the FAKE NEWS MEDIA,” Trump said. “I concede NOTHING! We have a long way to go. This was a RIGGED ELECTION!”

Despite the president’s all-caps tirades, his frivolous legal challenges across the country continue to be shot down.

Trump’s statement is also reminiscent of another from earlier in November when he tweeted “STOP THE COUNT,” even though doing so would have also ended with a Biden victory.