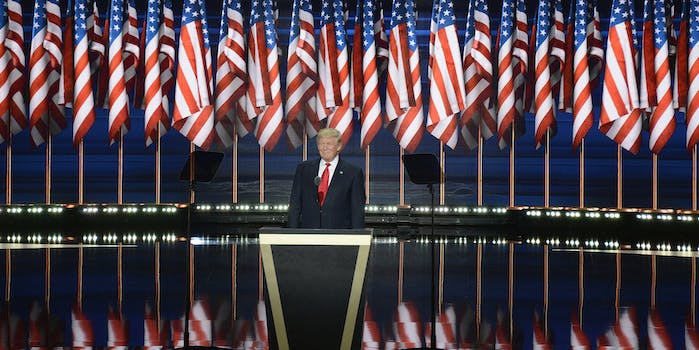 The world does not need Donald Trump's 'Second Amendment Remedy.'

I don’t think Donald Trump sincerely believes that anyone will actually go shoot Hillary Clinton. I don’t think he was explicitly saying, Hey someone go shoot her. I think he was trying to make what he thought was a joke, but because he’s such a complete asshole, it wasn’t funny.

Trump has a documented history of inciting violence at his rallies, and everyone who is in Trump’s base (and adjacent to it, in the larger conservative movement) knows precisely what someone means when they say “wink wink Second Amendment wink.” Look no further than the horrific attack at Planned Parenthood in Colorado Springs, Colorado, last November, where a gunman killed a police officer and two civilians, and injured nine others. The attacker, who was recently deemed incompetent to stand trial, was inspired by the rhetoric of the right wing, declaring himself “a warrior for the babies.”

That’s why the threat that Trump made isn’t limited to Secretary Clinton. When someone in the position he is in—a celebrity entertainer who is the Republican nominee for president—suggests that not only would it be acceptable for the “Second Amendment crowd” to go take care of her but laughs about it, he is normalizing violent behavior on a national stage.

I think he was trying to make what he thought was a joke, but because he’s such a complete asshole, it wasn’t funny.

Someone who wants to go shoot Secretary Clinton doesn’t need Donald Trump to tell him (because it’s always a man who does this sort of thing) to go do it. But what about the angry alt-right guy who wants to go use his Second Amendment Remedy to take care of another high-profile woman who bothers him? What about the unhinged guy who hates me, or John Scalzi, or Jessica Valenti, or Anita Sarkeesian? What about that guy, who is waiting to hear someone say what the voices in his head are saying? How much did the danger to us and people like us go up, because Donald Trump normalized and amplified his thinking?

We never know what it’s going to be that sets a dangerous and mentally ill person off. Charles Manson heard The White Album, and in his disturbed mind, that was the call he needed to hear to set his murderous rage into action. John Hinckley was inspired by a movie. David Berkowitz was moved to kill by a barking dog.

My point is that there are mentally unstable people out there who don’t need a lot of encouragement to turn their fantasies into real-life tragedies. And that’s why Donald Trump’s recklessness, and his supporters’ efforts to minimize it, terrify me. The threat he made may have spoken loudly and clearly to them. That is truly dangerous, and—like so many things he’s said and done—it further disqualifies him from holding elected office.

Wil Wheaton is an actor and author of the books Just A Geek, Dancing Barefoot, and The Happiest Days of Our Lives. You can watch his board game show, Tabletop, on YouTube.