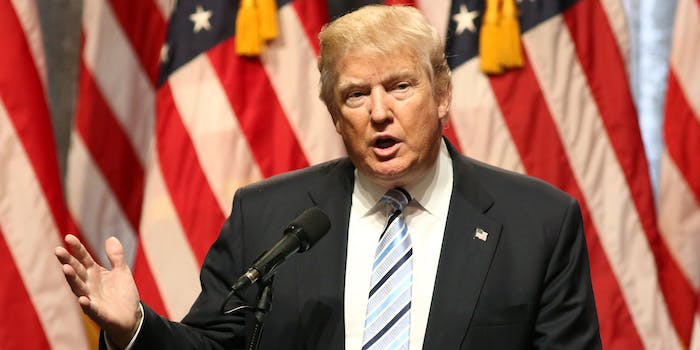 Trump on nuclear weapons: ‘Let it be an arms race’

'We will outmatch them at every pass and outlast them all.'

“Let it be an arms race, we will outmatch them at every pass and outlast them all,” Trump reportedly said during an off-air moment with Morning Joe‘s Mika Brzezinski.

The term arms race inherently evokes the Cold War-era nuclear arms race between the United States and the Soviet Union, which led to decades of pervasive fear of global annihilation.

Trump’s statement comes one day after the president-elect called for the U.S. to “strengthen and expand” its nuclear capabilities until the world comes “to its senses.”

The vagueness of Trump’s tweet left many wondering whether the incoming president meant that he wanted to update U.S. nuclear capabilities—which would be a continuation of President Barack Obama‘s initiative—or if he wanted to launch us into a new age of nuclear proliferation.

While Trump’s reported statement makes it clear that he meant the latter, statements from his team further confuse the matter. Jason Miller, Trump’s spokesman, told Reuters in regards to Trump’s tweet, “President-elect Trump was referring to the threat of nuclear proliferation and the critical need to prevent it—particularly to and among terrorist organizations and unstable and rogue regimes.”

Then, minutes after Brzezinski reported Trump’s comments, Matt Lauer at the Today Show pressed Trump’s incoming press secretary, Sean Spicer, on what the president-elect meant by his tweet.

“But other countries need to be put on notice that he is not going to sit back and allow them to undermine our safety, our sovereignty,” he added. “He is going to match other countries and take action.”

Matching other countries and taking action sounds, well, like an arms race.

Russian President Vladimir Putin also called for his country to strengthen its nuclear capabilities on Thursday, echoing Trump’s statement. However, Putin told reporters on Friday that he does not wish to build new nuclear warheads and was instead calling for upgrades to the country’s systems, as Obama has already proposed for the U.S. Putin said he has no desire for an arms race.

In other news, Trump is golfing with Tiger Woods today.