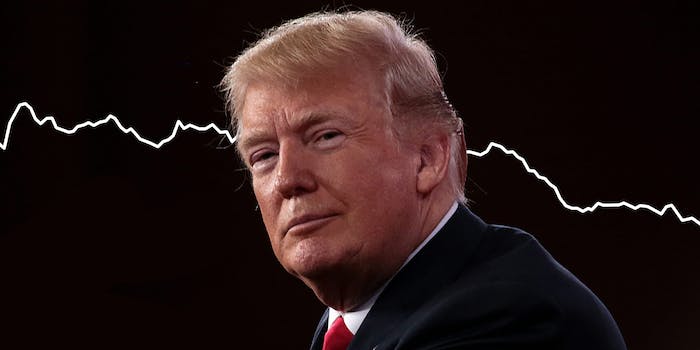 President Donald Trump is a polarizing figure—and his approval ratings reflect that.

While some people are feverishly supportive of the president, nearly every major poll tracking approval ratings for Trump are dismal (and sometimes historically low).

In fact, a poll from the Washington Post and ABC News in late August found that only 36 percent of those polled approved of Trump and 49 percent of people believed Congress should consider impeaching the president. The 60 percent disapproval rating in the poll was believed to be an all-time high.

It’s hard to take every poll in a vacuum, however, as each one has its own set of variables, and they speak to a small segment of Americans. That being said, taken all together, the polls do offer a glimpse into the views of a sample of voters on how the president is faring as he maneuvers through his second year in the presidency.

Here’s a look at some of the major polls that show how Americans approve or disapprove of Trump’s job in the Oval Office.

In mid-September, Real Clear Politics—which tracks numerous polls to find an average—found the president to have a 40.8 percent approval rating, compared to 53.6 percent who disapproved of him.

The website found that the president’s approval rating has been declining since late August, amid criticism of his handling of Sen. John McCain’s death and guilty pleas by his former lawyer Michael Cohen and former campaign chairman Paul Manafort.

The figure is a sharp decline from mid-June, when the president was found to have a 45 percent approval rating. Since then, he has hovered in the mid-to-low 40s, according to their weekly poll, with one week in August reaching 39 percent.

In early September Quinnipiac found that only 38 percent of those polled approved of Trump as president, compared to 54 percent who disapproved and 8 percent who weren’t sure.

In early July the university’s polling arm found Trump with a 40 percent approval rating, similar to what it was in June.

The Fox News poll also found 53 percent of those polled disapproved of his time in office.

The latest findings by Reuters and Ipsos, who poll weekly, are similar to numerous other pollsters.

As of Sept. 9, polls found Trump with a 40.3 percent approval rating, compared to 53.6 percent of those polled who disapproved of him.

Rasmussen, a polling firm Trump has frequently cited because of its generally favorable ratings toward the president, paints a more rosy picture.

Whatever way you slice it, the president provokes strong reactions, and most of those aren’t good.