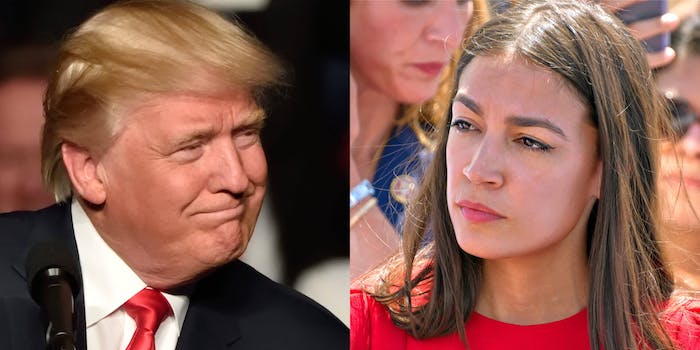 Ocasio-Cortez found a choice old tweet of his during the fight.

President Donald Trump and Rep. Alexandria Ocasio-Cortez (D-N.Y.) have feuded over numerous topics since the young Democratic Socialist’s meteoric rise to prominence. In fact, it’s hard to find a policy fight the polar opposites haven’t had.

Their latest is only the biggest: How to pick the next president.

Ocasio-Cortez recently called the electoral college a racist scam in both an Instagram story and series of tweets over the past week.

“The electoral college has a racial injustice breakdown,” Ocasio-Cortez said. “Due to severe racial disparities in certain states, the electoral college effectively weighs white voters over voters of color, as opposed to a ‘one person, one vote’ system where all our votes are counted equally.”

I see Fox News is big mad about abolishing the electoral college.

So let’s talk about it.

1) If the GOP were the “silent majority” they claim, they wouldn’t be so scared of a popular vote.

They *know* they aren’t the majority. They rely on establishing minority rule for power.

It’s also had a number of surprising results, ones that have been unfavorable to Democrats in the past couple of decades, with both Al Gore and Hillary Clinton losing the presidency despite garnering more votes nationwide.

In the wake of her comments, Trump sent out a fundraising email this week calling Ocasio-Cortez “crazy.”

“Don’t let AOC silence you,” was the subject line, with Trump saying she “dialed up the crazy” in his opening sentence.

Trump asked his supporters to sign a petition to let Ocasio-Cortez know that “This country belongs to AMERICANS from EVERY zip code, not just the Coastal Elites and Liberal Mega Donors.”

Urban centers make up a great deal of this country’s population and tend to vote liberal. Whether they deserve to have their votes stripped of some weight in favor of less populous rural areas, or whether rural areas shouldn’t have nearly as much power as they do thanks to the electoral college remains a contentious debate.

But instead of responding to Trump, last night Ocasio-Cortez let the president make the argument for her side, flagging one of his old tweets where, well, he railed against the electoral college.

“The electoral college is a disaster for democracy,” Trump tweeted on Nov. 6, 2012, apparently as a response to then-President Barack Obama’s win on Election Day.

I’m so glad the President and I agree that the Electoral College has got to go. https://t.co/aXn4IgwJjv

While Trump is not beholden to the sentiments of his past tweets, it’s nice to see the diametrically opposed find common ground, if only for even a second.