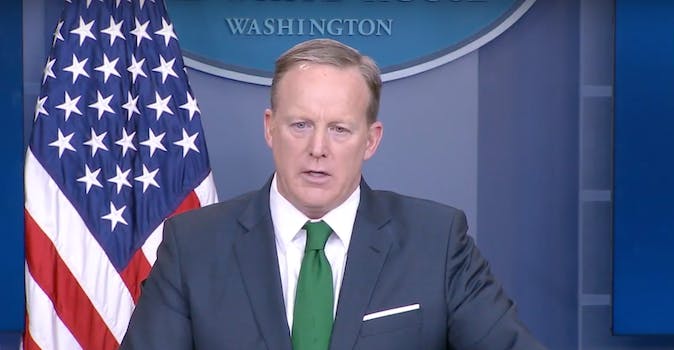 The White House has vowed to never repeat the allegation.

The White House has issued a formal apology to the British government after Press Secretary Sean Spicer blamed America’s ally for spying on President Donald Trump ahead of the 2016 election.

Both Spicer and National Security Adviser H.R. McMaster reportedly spoke to British officials and vowed that the unsubstantiated allegation would “not be repeated.” An unnamed source in British intelligence told the Telegraph, “The apology came direct from them.”

Following multiple reports of an apology, the White House tells the New York Times that no apology took place. “He didn’t apologize, no way, no how,” an unnamed White House official said.

What has now become an international incident stems from President Trump’s March 4 tweets in which he accused former President Barack Obama of having his “wires tapped” at Trump Tower ahead of the 2016 election. “I’d bet a good lawyer could make a great case out of the fact that President Obama was tapping my phones in October, just prior to Election!” Trump wrote.

Since Trump made that explosive claim against his predecessor—without offering any evidence—former Director of National Intelligence James Clapper and FBI Director James Comey have denied the Obama administration spied on Trump Tower. The chairs and vice-chairs of both the House and Senate intelligence committees have said there is no evidence of surveillance on Trump Tower.

Spicer repeated the allegation that British spy agency GCHQ surveilled Trump at Obama’s request—a claim first asserted by Fox News contributor Judge Andrew Napolitano—during Thursday’s White House press briefing, which followed soon after the Senate Intelligence Committee’s bipartisan leadership refuted the president’s allegations of surveillance against Trump Tower. Reading verbatim Napolitano’s claim, Spicer said, “Three intelligence sources have informed Fox News that President Obama went outside the chain of command. He didn’t use the NSA, he didn’t use the CIA, he didn’t use the FBI, and he didn’t use the Department of Justice.” Spicer also read from a number of other news reports, none of which claim surveillance on Trump Tower.

The cost of falsely blaming our closest ally for something this consequential cannot be overstated. And from the PODIUM. https://t.co/lJ1Q1GR3lB

In response, GCHQ issued a statement in which they called Napolitano’s claims “nonsense.”

“Recent allegations made by media commentator Judge Andrew Napolitano about GCHQ being asked to conduct ‘wire tapping’ against the then-president elect are nonsense,” the agency said. “They are utterly ridiculous and should be ignored.”

Spicer said Thursday that Trump “stands by” his claim that Obama surveilled him—in other words, that his predecessor committed the greatest political crime in a generation—and promised that the Department of Justice would reveal evidence to prove him right within weeks. The House Intelligence Committee, which met Trump’s call to investigate the allegations, has given DOJ until March 20 to do so.

Update 12:55pm CT, March 17: The White House now denies that either Spicer or McMaster apologized, according to the New York Times. “He didn’t apologize, no way, no how,” an unnamed “senior West Wing official” told the Times.

WH now sez there was no apology to Brits from @PressSec /McMaster; they fielded complaints & defended Spicer's mention of wiretapping story