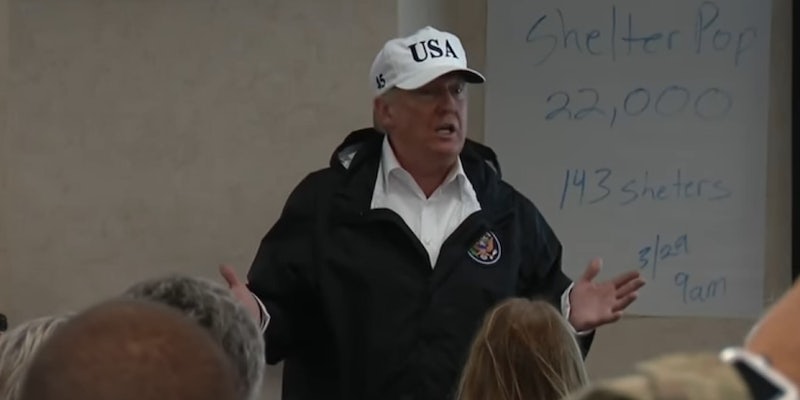 It's unclear if the money will be Trump's or from the Trump Organization.

President Donald Trump will donate $1 million dollars of his own money to relief efforts surrounding Hurricane Harvey, according to administration officials.

“I’m happy to tell you that he would like to join in the efforts that a lot of the people we’ve seen across this country do and he’s pledging $1 million of personal money to the fund,” Sanders said.

Sanders followed up the announcement by asking the White House press corps for suggestions on places to donate the money. Sanders said she was not sure whether the money would come from the Trump Organization or the president’s personal fortune.

The request appeared to be a dig at the press corps for reporting on Trump’s past donations, as she couldn’t help but chuckle when asking.

Trump has also pledged two portions of his salary to federal agencies, one to the National Park Service and the other to the Department of Education.

The president would join a growing number of high-profile people to donate significant amount of money to the relief efforts, including NFL star J.J. Watt who has raised upward of $10 million for those affected by the hurricane.

Trump and First Lady Melania Trump are expected to travel back to Texas and Louisiana this weekend. They both visited Texas on Tuesday, meeting with lawmakers as they work to address the damage brought by Hurricane Harvey.