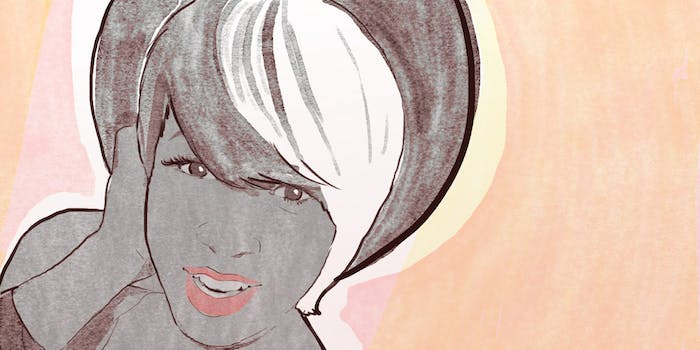 Trans women of color are being disproportionately murdered.

The list of slain transgender women in 2015 continues to grow at a troubling rate.

The total number of trans women victims in 2015 is, as of this writing, 22. A 23rd woman, Mya Hall, was killed by the state after she and a friend crashed their car into the gates of the National Security Agency headquarters in Fort Meade, Maryland, on March 30. Of the 22 murdered, 19 were trans women of color.

The spike in the murders of trans women of color has sparked popular interest in hashtags like #BlackTransLivesMatter and further pushed the conversation of society’s treatment of trans people including other trans issues: misgendering, unemployment, homelessness, the stigma of sex work and health disparities.

Here’s a complete list of trans women murdered this year.

Papi Edwards, 20, died from a single gunshot wound to the chest on Jan. 9 in Louisville, Kentucky. Henry Richard Gleaves, 20, was charged in Edwards’ murder.

She was misgendered in the little coverage she received back in January. Local news station WHAS 11 referred to her as “Sherman Edwards.” According to Autostraddle, Lourdes Ashley Hunter, Trans Women of Color Collective‘s executive director referred to her as Goddess Edwards. While there have been contradicting reports on Edwards’ gender identity, a BuzzFeed investigation found that Edwards did identify as a black trans woman.

Lamia Beard, 30, was shot early morning on Jan. 17, in Norfolk, Virginia. She died at the hospital. Like Edwards, she was another black trans woman misgendered in media coverage, the Advocate reported. According to the Virginia-Pilot, police are still investigating Beard’s murder.

Ty Underwood, 24, was found dead on the morning of Jan. 26, on a street in Tyler, Texas, according to KLTV. Carlton Champion Jr., a 21-year-old football player who was reportedly in a relationship with Underwood, was charged in the murder.

Yazmin Vash Payne, 33, was stabbed to death on Jan. 31 in Los Angeles. According to the Advocate, Ezekiel Dear, 25, turned himself and confessed to Los Angeles Police Department the following day.

Taja DeJesus, a 36-year-old Latina trans woman, was stabbed to death the morning of Feb. 1, in San Francisco. According to BuzzFeed, her Facebook page indicated she worked for TRANS: THRIVE, a center for trans people.

The 49-year-old suspect, James Hayes, was found dead on Feb. 6, according to SF Weekly. Authorities believe he died from self-inflicted wounds.

The murder of DeJesus sparked a rally in support of trans Americans called #TurnUp4TransPeople.

Penny Proud, a 21-year-old black trans woman, was shot to death on Feb. 10, in New Orleans. #MakePennyProud became a popular hashtag on Twitter shortly after her murder. According to the Advocate, she was likely killed during a robbery attempt by an unidentified suspect.

Bri Golec, 22, was stabbed to death by her father, Kevin Golec, on Feb. 13 in Akron, Ohio, reported Cleveland.com. Bri, who is said to have identified as female but maintained a fluid gender identity, reportedly told friends that her father was doing drugs just before the murder took place.

Kristina Infiniti, 46, was found dead in her Miami home on Feb. 19. Her friends claimed her boyfriend stabbed her to death. According to the Miami Times, the police reported the Latina trans woman’s death as a suicide before considering a homicide investigation.

Keyshia Blige, 33, was driving with a passenger when she was multiple shots were fired into her car on March 7, in Aurora, Illinois, according to the Guardian. One shot hit Blige, and she crashed into another car. Originally she wasn’t identified as a black trans woman, and the Chicago Tribune referred to her as Bryce Stiff. She wasn’t added to the list of trans women murdered until August.

London Chanel, a 21-year-old black trans woman, was stabbed in the back and neck on May 18. Raheam Felton, 31, was charged in the murder of Chanel. NBC Philadelphia reported that Felton, with the help of a friend, carried Chanel outside of the home after her death.

Mercedes Williamson, 17, was murdered and buried by Josh Brandon Vallum, 28, in Rocky Creek, Alabama, on May 30, the Advocate reported. Her body was discovered buried on Brandon’s father’s property. Brandon reportedly confessed to his father that he killed Williamson.

Jasmine Collins, 32, was stabbed to death on June 23, in Kansas City, Missouri, during an argument over a pair of shoes, reports the Advocate. A black trans woman, Collins wasn’t included on the list of trans women murdered until August, due to police and local media reports misgendering her.

Tia Townsel, 33, was charged with second-degree murder in the death of Collins.

Ashton O’Hara, 25, was found dead on July 14, in Detroit, Michigan, but wasn’t identified as a black trans woman until August. According to BuzzFeed, O’Hara was gender fluid and still used male pronouns. The article also identified the suspect as 38-year-old Larry Gaulding, who was charged with premeditated first degree murder.

India Clarke, a 25-year-old black trans woman, was shot in her head and arm at a Tampa park, on July 21. DNA evidence connected Keith Lamayne Gaillard, 18, to Clarke’s death, according a Hillsborough County Sheriff’s Office press release. The Huffington Post reports that Lamayne was charged with first-degree murder and possession of a firearm.

K.C. Haggard, a 66-year-old trans woman, was stabbed in the neck in Fresno, California, on July 23. The attack was caught on video, according to the Advocate. Local news station KSFN-TV reported that Haggard was called to the window of a SUV by the suspect, who soon after attacked her.

The body of Shade Schuler, 22, was found decomposing on July 29 in Dallas, Texas. It took authorities two weeks to identify her, the Guardian reported. The Dallas Police Department, which is investigating the murder, initially misgendered the 22-year-old black trans woman. In September, around 30 people held a vigil in honor of Schuler, the Texas Observer reported.

Amber Monroe, 20, is the second black trans woman to be murdered in Detroit. She was shot as she was exiting a car near the Palmer Park area on Aug. 8. She was misgendered in the medical exam, which said she died for a single gunshot wound, the Guardian reported.

Kandis Capri, a 35-year-old black trans woman, was shot to death in a Phoenix apartment on Aug. 11. According to AZCentral.com, around 500 people showed up and paid their respects Capri at her funeral on Aug. 27.

Elisha Walker, a 20-year-old black trans woman, was reported as missing in November of last year. Her remains were discovered 100 miles from her hometown of Salisbury, North Carolina, on Aug. 13, the Guardian reported. A 23-year-old Latin Kings gang member, Angel Arias, was charged in her murder and for stealing her car on that same day.

Tamara Dominguez, a 36-year-old Latina trans woman, was repeatedly run over by a truck on Aug. 15, in Kansas City, Missouri, according to KCTV5. Police didn’t classify her murder as a hate crime. According to the Advocate, she stepped out of a SUV before the male driver ran her over.

A hate filled mob in Philly just lynched #KeishaJenkins. When will this world believe that #BlackTransLivesMatter pic.twitter.com/JtxpwYkFf1

Keisha Jenkins, 22, recently became the 18th trans woman of color murdered since January in the U.S.

A group of five to six men reportedly beat and shot Jenkins right after she had a car drop her off in North Philadelphia, according to the Associated Press. One of the men shot her in the back twice, homicide Capt. James Clark told reporters.

“We don’t know if it’s potentially a hate crime, or a robbery—we really don’t know,” Clark told the AP last week. “It’s too early in the investigation.”

Police arrested one man thus far, according to the Philadelphia Inquirer. Pedro Redding was charged with murder, conspiracy and other offenses, although police say he didn’t shoot Jenkins.

According to police, Redding implicated three other men in the murder, and they were still on the loose as of Wednesday, Oct. 14.

Jenkins’ family started a GoFundMe campaign for her funeral expenses. They raised more than their $5,000 goal.

Zella Ziona, a 21-year-old black trans woman, was shot multiple times in the alleyway of a shopping center on Oct. 15, in Montgomery Village, Maryland. Rico LeBlond, 20, was arrested on Oct. 16 in the murder of Ziona. Investigators are considering hate-crime charges, according to ABC News.

Correction: An earlier version of this article incorrectly stated the total number of trans women of color murdered in 2015.