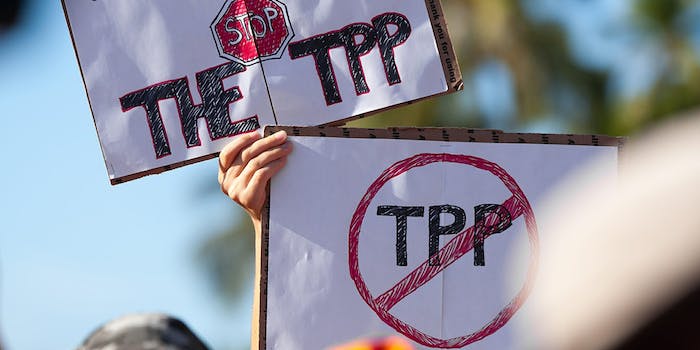 The deal now heads to Congress, but a vote isn't expected for several more months.

After seven years of negotiations, untold numbers of protests around the world, and dire warnings from activists and Internet-freedom groups, the twelve countries negotiating the Trans-Pacific Partnership have come to an agreement.

All that remains is for the individual countries to sign off on it, which means that the ball is in Congress‘ court.

The TPP is a sweeping international trade deal, referred to by some protesters as “the dirtiest deal you’ve never heard of” and by Internet advocacy groups as a “threat to the global Internet” based on leaked versions of its intellectual property chapter. The TPP’s members have swelled to a dozen nations along the Pacific Ocean—all of North America and Oceania, as well as countries in South America and Asia.

The deal has been a top priority for the Obama administration, although it has more support among Republicans than Democrats in Congress. In a statement on Monday, the White House touted the fact that the agreement eliminates many tariffs among participating countries and claimed that the deal will “significantly expand the export of made in America goods and services and support American jobs.”

In June, Congress passed a bill to “fast track” all trade agreements, meaning that the House and Senate can’t argue over individual parts of pacts like the TPP; they must either sign off or deny them in full.

The TPP has faced withering criticism for its secrecy. While trade negotiations are traditionally kept from the public, corporate lobbyists have been given some access to the meetings, even as journalists and advocacy groups have been barred from attending them. Even members of Congress who had access to the relevant documents were prevented from bringing aides into secure briefing rooms to help them analyze the deal.

The public’s understanding of the TPP comes largely from various drafts leaked to and published by WikiLeaks.

“As with previous free trade agreements, the TPP has been negotiated subject to a closed process, not accessible to the public, but accessible to industry advisors,” said Margot Kaminski, an assistant professor of law at Ohio State University and a fellow at the Information Society Project at Yale Law School.

“In the past, unsurprisingly, this has given rise to content favoring those industry advisors,” Kaminski said. “Because of this process, I and others cannot meaningfully comment on the text of the agreement—because we can’t see it. I have no doubt that many compromises were reached, and that at least some were at the public’s expense.”

Congress is not expected to vote on the final TPP until February.