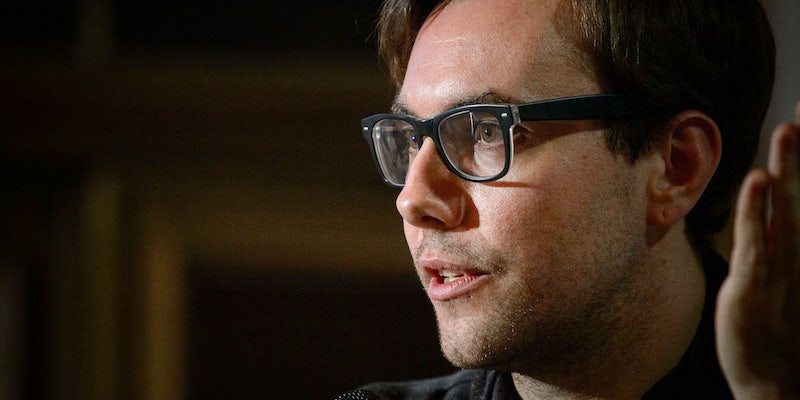 The project further dismissed two others over lesser accusations.

An internal investigation prompted by the Tor Project has revealed numerous incidents of sexual misconduct, bullying, and intimidation by a former core developer.

Jacob Appelbaum, a noted digital activist and journalist regarded for his work at WikiLeaks and on classified materials leaked by Edward Snowden, was forced out of his position at the Tor Project on May 25 amid accusations by more than a half dozen individuals who say they were sexually abused and harassed by the 33-year-old hacker.

“A number of people have come forward with first-person accounts and other information,” Shari Steele, executive director of the Tor Project, said in a statement released Wednesday. A professional investigator hired by the project worked closely with Steele and attorneys while interviewing “many individuals to determine the facts concerning the allegations,” she said.

“Many people inside and outside the Tor Project have reported incidents of being humiliated, intimidated, bullied and frightened by Jacob, and several experienced unwanted sexually aggressive behavior from him,” Steele continued. “Some of those incidents have been shared publicly, and some have not.”

Steele added that two additional individuals are no longer affiliated with the Tor Project due to “inappropriate conduct.” Sources with knowledge of the investigation told the Daily Dot that the project cut ties with the two men, only one of whom was an actual project member, more than a month ago. The two U.S.-based developers, unidentified by the Tor Project, are not accused of assault, the sources said.

“In addition, the Tor community has created a community council to help to resolve intra-community difficulties, and it is developing membership guidelines, a code of conduct, and a social contract that affirms our shared values and the behaviors we want to model,” added Steele. “We expect these to be finalized and approved by the community at or before our next developer meeting at the end of September.”

Appelbaum has denied the allegations against him. Since they were made public, his Twitter feed has maintained silence. His last tweet pointed followers to a statement in which he describes the alleged victims as conspiring in “a calculated and targeted attack” against him, comparable to “character-assassination tactics” deployed in the past against “fellow members of the LGBT community.” Several of his accusers are members of that community.

Over the past decade, Appelbaum became the prominent face of Tor—the anonymity software which seeks to protect the identity and location of its users—by representing the project at various conferences and conventions around the world. Enthusiastic profiles of his work by publications such as Rolling Stone inflated Appelbaum’s public image into something akin to rock-stardom—influence he used, accusers say, to intimidate and silence his victims.

Initially, seven of Appelbaum’s alleged victims sought to publicize their claims against him anonymously out of fear of retaliation. Over the course of a two-week period last month, several women came forward to reveal new allegations of rape and physical assault, while others attributed their names to existing stories.

In interviews with the Daily Dot, several women who said they were sexually harassed or assaulted by Appelbaum described being members of an “underground victims network” which enabled the women—and some men—to keep track of his movements at various hacking-related conventions.

More than a dozen individuals contacted the Dot during its investigation in June to report either witnessing or experiencing firsthand Appelbaum’s sexually inappropriate behavior. Most requested anonymity out of fear of reprisal from within the tech community, while others were silenced by apparent conflicts of interest related to their work; Appelbaum was a member or contract employee of numerous organizations in the realm of digital rights and press freedom, though many—Freedom of the Press Foundation, Cult of the Dead Cow, Nosebridge, and others—dismissed him after the allegations went viral.

Appelbaum was defended by a June 11 solidarity letter initially signed by 12 women—more than a dozen names were voluntarily added later—many of whom are affiliated with Appelbaum through their work, including WikiLeaks editor Sarah Harrison and Courage Foundation attorney Renata Avila. The women said they were not “apologists for any wrongdoing” but ridiculed what they called a “coordinated and one-sided attack” on Appelbaum’s character. The group also said journalists who were investigating the accusations of rape were “unwilling” to fact-check their stories.

Appelbaum himself repeatedly ignored requests to speak with Dot reporters, while communicating through a publicity firm that, after several exchanges, claimed Appelbaum was not its client. The firm was at the time promoting the independent film Risk, a First Look Media project profiling the tribulations of WikiLeaks founder Julian Assange. (Appelbaum and Harrison both star in the film.)

Oscar award-winning filmmaker Laura Poitras, who wrote and directed Risk, said in a statement the project was working to divorce itself from any conflicts of interest. “I witnessed this with how the Freedom of the Press Foundation handled our decision, and we are doing the same with the film,” she said. First Look Media did not respond to multiple requests for comment regarding the film.

As a result of the allegations against Appelbaum, the Tor Project restructured its board with new directors, as reported by the New York Times, on July 13. Two of the seven departing directors, Roger Dingledine and Nick Mathewson, are co-founders of the project.

The new board includes: Cindy Cohn, executive director of the Electronic Frontier Foundation; Bruce Schneier, a distinguished cryptographer and security expert; Megan Price, executive director of the Human Rights Data Analysis Group; Gabriella Coleman, an academic and anthropologist of McGill University; and Linus Nordberg, a Swedish privacy activist who operates one of the project’s direct authorities.

According to its website, Appelbaum is an adviser to the Centre for Investigative Journalism, a group that “facilitates the education of the public and the community in the craft, culture, and methodology of journalism.” Multiple requests for comment during the past month have gone unanswered by CIJ Director Gavin MacFadyen and other board members.