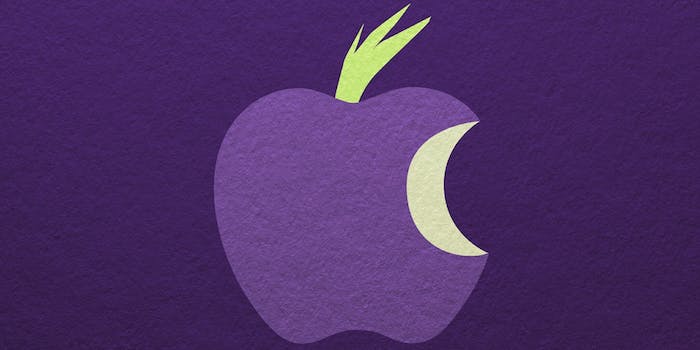 Tor is getting major upgrades on iOS 9

Apple iPhone users are about to get a privacy upgrade.

While presidential candidates, law-enforcement officials, and members of Congress debate the future of encryption on your smartphone, Apple’s iOS 9 is set to receive a major privacy upgrade.

A group of privacy-advocate hackers are now in early stages of bringing free, system-wide Tor anonymity apps to the Apple App Store for the first time, the Daily Dot has learned.

Thanks in large part to new features introduced in last month’s release of iOS 9, iPhone and iPad users may finally be getting their hands on the most powerful Tor apps ever available for Apple’s mobile devices.

“We just started to work on it and think about it. Tor knows we can’t ignore all the iOS 9 users in the world.”

“There are a bunch of pieces in the works,” Tor developer and Guardian Project leader Nathan Freitas told the Daily Dot. “We just started to work on it and think about it. Tor knows we can’t ignore all the iOS 9 users in the world.”

FBI Director James Comey has criticized the choices of those tech companies for the past year, arguing that encryption places users “beyond the law.”

“Let me be crystal clear,” Apple CEO Tim Cook countered. “Weakening encryption or taking it away harms good people who are using it for the right reason.”

The Tor network encrypts user traffic and masks key data like IP addresses and other details that can be used to identify an Internet user. Incorporating Tor into iOS would give users an added layer of security and online anonymity—the very type that Comey and other federal law-enforcement officials say is aiding criminals and terrorists.

Android, the most popular mobile operating system, has had powerful device-wide Tor apps for years. Now Apple’s mobile platform is on track to join it.

The new iOS offering will come from a group led by Chris Ballinger, founder of ChatSecure and including Frederic Jacobs of Open Whisper Systems; Mike Tigas, who wrote Onion Browser; and Conrad Kramer, a former device jailbreaker.

That group is working on iCepa, a system-wide iOS Tor client that can change the way every app on iOS connects to the Internet by routing traffic from each app through the Tor network.

“iOS has some new capabilities in it,” Freitas said. “You can create a device-wide [virtual private network], and it can be a Tor-based VPN. So we can create an Orbot-like service on iOS 9, which is exciting.”

Orbot empowers other Android apps to use Tor. It’s an anonymity amplifier that’s been impossible on iOS up until now because Tor could only run in a single app at a time.

In addition to more power, an iOS version of Orbot would mean more safety and security for users.

Whenever a major problem is found with Tor that needs quick fixing—last year’s OpenSSL bug, for instance—it makes for much better security to have one canonical Tor app that fixes the problem with a single update rather than every app that incorporates Tor having to update individually. The goal is to have as few points of failure as possible.

Additionally, Mozilla is currently working on an iOS version of Firefox. The classic Tor Browser is built on top of Firefox, so Mozilla’s hard work on iOS makes the prospect of a Tor Browser on iOS much more attainable.

Before iOS 9, Tor has had a spotty history on Apple’s mobile devices. Fake apps have spread malware from the App Store for months, while poorly built copycats have muddied the service on that platform.

The best Tor-related offering on iOS right now is Onion Browser, a $1 app that Freitas described as “state-of-the-art” for versions of iOS up to iOS 8.

Because work has only just begun on bringing a new generation of Tor apps to iOS, it’s not yet clear how everything will work out. Freitas spoke about the possibility of a free Orfox-like app on iOS that runs on top of Firefox, much like the original Tor Browser for desktop PCs. Tigas, the creator of Onion Browser, sees a future for a reworked version of his app on iOS 9 as well.

It’s clear that more powerful privacy is on its way to Apple devices.

Clarification: There are two separate groups of developers working on Tor apps for iOS 9. We’ve updated this piece with additional information on the group working on iCepa.

Correction: There is only one team working on the new iOS Tor software described here: the iCepa team, led by Chris Ballinger. The article originally said two teams were at work on separate projects, but Nathan Freitas is simply supporting the iCepa team. We regret the mistake, and have updated for clarity.