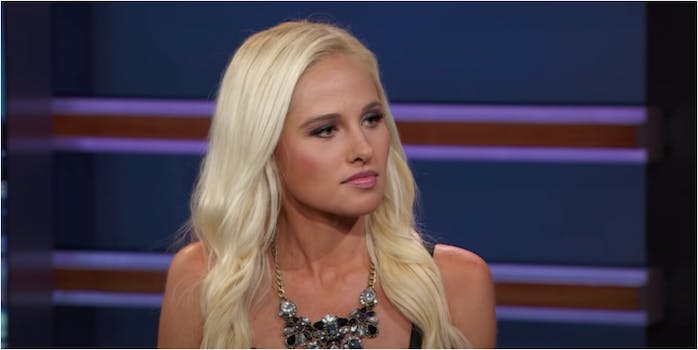 Fox Nation host Tomi Lahren said on Monday that she was called a “Nazi Barbie” and someone tried to throw eggs at her. Her comments came in an interview with Fox News Radio’s Jimmy Failla.

Lahren, mostly known for her conservative hot takes, admitted to Failia that people were targeting her. According to her, one man called her a “Nazi Barbie,” while another woman once tried to pelt her with eggs.

“Yesterday, I had a grown man with a cigarette in hand and a mask on his face telling me once again that I’m ‘Nazi Barbie’,” Lahren said.

Lahren also said she was called “Nazi Barbie” and “white power Barbie” at a speaking engagement at Clemson University.

She also said that people in her apartment complex recognize her for her politics.

“I had a girl from the sixth floor of an apartment complex try to throw eggs at me,” Lahren said. “Of course, being a liberal, she’s not super athletic. So she missed me.”

Lahren has made a name for herself as a conservative firebrand and supporter off former President Donald Trump’s most hardline policies, becoming one of the most unabashed far-right media figures.

Unfortunately, her candor has backfired, as people on Twitter think the name is fitting.

“Tomi Lahren is upset that she can’t go out in public without people calling her a Nazi Barbie. Hey, Tomi, have you considered not being a Nazi Barbie?” one user added.

Lahren said she’s been called a “Nazi Barbie” so often that she was “used to it at this point.”