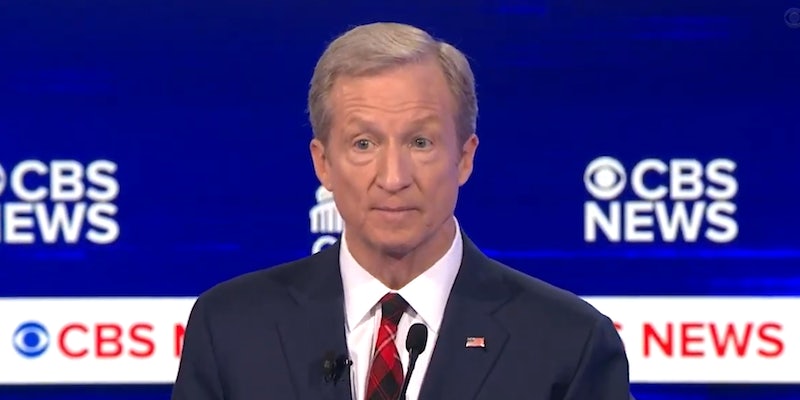 Reparations have been debated for decades. In recent years, the legacy of racial injustice has led many, mostly liberals, to increasingly call for reparations for the descendants of African-American slaves.

Advocates believe that the economic benefit the United States received from slavery should be paid back to the descendants of those who unwillingly provided the unpaid labor that fueled the economy.

“I believe I’m the only person on this stage who believes in reparations for slavery,” he said. “… We should have a formal commission on race to retell the story of the last 400-plus year in American of African-Americans, of systematic legal injustice, discrimination, and cruelty.

“But also of 400-plus years of building the United States of America.”

People had thoughts. A few pointed out that former candidate Marianne Williamson had also supported reparations. Many supported him, but some thought that, as a billionaire, Steyer should just start signing checks.

“Tom Steyer could give his billions away to descendants of slaves tomorrow,” tweeted Peter J. Hasson.

“Well, that’s a switch. #Steyer, especially given his bank account, is not the guy I thought I’d see advocating reparations over slavery and racism,” said @artisan002.

“Respect to Tom Steyer for the statement about reparations and the weight of history when it comes to race,” said Tim Wise.

Steyer’s campaign doubled down on his statement during the debate.

“Every policy area touches on race. I started a bank to correct injustice in financial services, and help to make loans to Black-owned, Latino-owned and women-owned businesses,” the Steyer campaign tweeted from his official account.

“But if we are going to correct historic economic injustice, we must support reparations for slavery.”