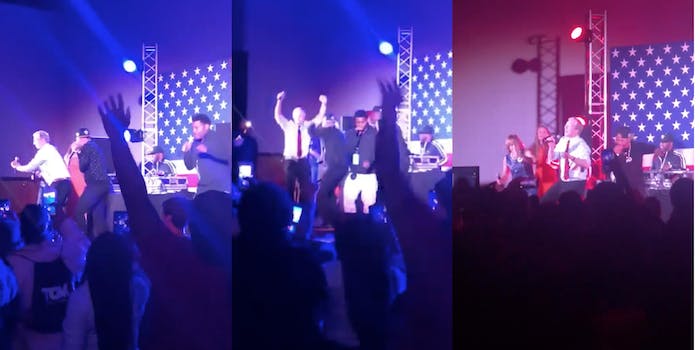 Tom Steyer backs that a** up at rally with Juvenile

'I swear to god this primary is trying to kill me.'

Voters watched Pete Buttigieg dance away to “High Hopes” and try to raise the roof. Voters watched fake Michael Bloomberg supporters create a very plausible “Moves Like Bloomberg” campaign dance to counter Buttigieg’s. And voters watched as former Vice President Joe Biden’s supporters came up with a new spin on “Everybody (Backstreet’s Back).”

Dancing in the 2020 Democratic race to the White House is nothing new. Yet, nothing seemed to prepare us for this moment.

Juvenile performed his 1998 bop “Back That Azz Up” at 2020 hopeful Tom Steyer‘s South Carolina rally on Friday night. And Steyer did just that.

In a video that captured the moment, Steyer gyrates to the classic, which still frequents nightclubs, onstage at Allen University, an HBCU. Even though Steyer can be seen with a mic of his own in hand, as Pitchfork notes, he very well may not know any of the song’s lyrics.

Upon seeing the video, people online dubbed this the “dumbest election of all time” and noted just how tired they are.

“I swear to god this primary is trying to kill me,” Sen. Kamala Harris’ (D-Calif.) niece, Meena Harris, tweeted.

“What I found in South Carolina is not just talent,” Steyer said at the rally, referencing Juvenile, per the Daily Mail. “Not just my dancing.”

The rally occurred just a day before the primary in the Palmetto State, where the majority of the electorate is Black. According to Vox, Biden is slated for victory, with Sanders–who is the frontrunner, regardless of the outcome–and Steyer vying for second place.