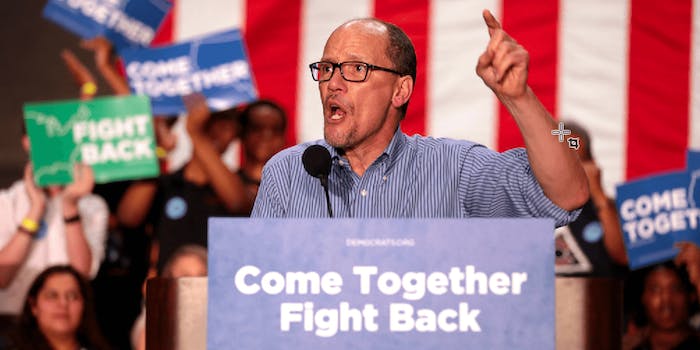 A petition for Perez to resign has resurfaced and gained traction amid the Iowa caucus chaos.

An old petition calling for the resignation of Tom Perez, chairman of the Democratic National Committee (DNC), has resurfaced and is picking up steam online amid the Iowa caucus chaos.

12,000 people have signed a petition calling on DNC Chair Tom Perez to resign over this embarrassing Iowa fiasco. https://t.co/eOL3sCpO0k

Twitter users with varying political ideologies—everyone from Sanders supporters to an account with the display name “Republicans for Yang“–began sharing it Feb. 3 in response to the “botched” Iowa caucus on that same day.

The Iowa caucus earned the labels of “mess” and “disaster” after trying and failing to use an app to calculate results. The resulting issues sparked plenty of anti-Perez sentiments on Twitter, particularly in reference to a tweet that claimed the DNC put in three years of preparation for the big night.

For three years, we’ve been preparing for the process that officially kicks off tonight in Iowa: the Democratic presidential primary. Today our chair, @TomPerez, reflects on the reforms we’ve made to make this the most transparent primary in our history: https://t.co/8w7gtSfqil

“You prepared for this for three years?” Cullen Tiernan, the press assistant for Rep. Tulsi Gabbard (D-Hawaii), asked in the replies.

So, let me get this straight: in 2016, @DNC was hacked by the Russians. Now, we have no results in Iowa because of an app created TWO MONTHS AGO & never tested or vetted, and you want to run the country? See where I'm going here? #IowaCaucusDisaster

Jackass Olympics. You win the Gold.

— i bless the rains down in castamere (@Chinchillazllla) February 4, 2020

It’s not the only petition out there calling for Perez’s resignation, but it’s the one that looks to be gaining the most traction. It currently has more than 15,000 signatures.
The petition’s comments, which detail why a person signed, are pretty harsh, too.

“The Democratic party has become the Republican party,” one reads. “They are beholden to the same donors. There is no current party representing the people, only corporate interests.”

Another says that the chairman’s resignation would allow for progressive growth within the party.

“Tom Perez cannot manage a party that is moving further left and is closer to its roots than it has been in decade, especially when he and other establishment, corporate Democrats feel the need to dream up new ways of tampering with the Democratic caucus or primary results,” it reads. “Please resign, Tom Perez. Allow Democracy to flourish.”

Some, however, kept it simple.