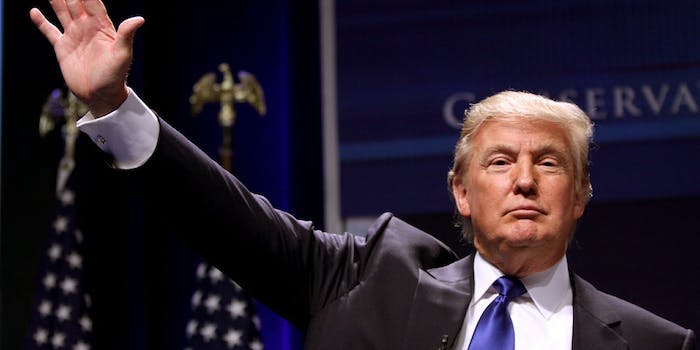 Given his record of beating ball-deflation charges, it’s no surprise that Tom Brady is a winner in Donald Trump’s book.

He was the NFL’s big victor last week when a U.S. District Court judge for the Patriots quarterback’s role in #Deflategate. As we all know, Donald Trump loves a winner.

Just days after Brady’s win in a U.S. district court in the saga that has become known as “Deflategate,” a reporter spotted one of Trump’s now-iconic “Make America Great Again” hats in Brady’s locker.

Brady, who has kept his political beliefs to himself (although he’s believed to be a conservative), admitted Tuesday that the hat was his and that Trump, the 2016 Republican frontrunner, is conducting an “amazing” presidential run.

He also confirmed to WEEI that the hat was a present from Trump.

“He sent it to me via [Patriots owner Robert Kraft],” Brady said. “I’ve known him for a long time, and he always gives me a call on different types of motivational speeches at different times. Now that he’s running for president, he sent me a hat and he gave it to [Kraft] a couple of weeks ago, so it found its way to my locker.”

The friendship, Brady said, began in 2002 when he was a judge at the Miss USA pageant. Brady wouldn’t say whether he would vote for Trump, his old golfing buddy, but he did allow that he was impressed by the businessman’s performance thus far.

“It’s pretty amazing what he’s been able to accomplish as an entrepreneur and then really as a television star and now running for political office,” Brady said. “People who can do those types of things and can transition into different arenas and still have that type of appeal and carryover, he’s obviously appealing to a lot of people and he’s a hell of a lot of fun to play golf with.”

Trump sent Brady some love after he was vindicated in the Deflategate scandal, clearly pumped that Brady had beaten the rap.