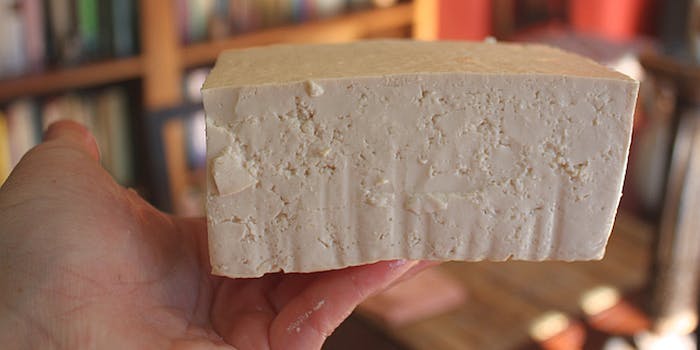 In the past few weeks, there’s been a lot of chatter coming from the Twitter account @tofu_product, a bot that takes whatever someone tweets at it, grabs random words from elsewhere in their timeline, and strings together (mostly) incoherent sentences, in an effort to “mimic” your style of writing. It’s a virtual conduit for “flavor” absorption.

Musician and programmer Joe Toscano is the sentient being behind the @tofu_product bot. He assures this isn’t @Horse_ebooks-style trickery, but rather an experiment in linguistics and speech patterns, developed on Apple tech. “It’s less interesting now that we know it’s human-controlled,” he said of the longtime Twitter-account-turned-publicity-stunt. “But it was still a cool story nonetheless.”

“I created @tofu_product purely as a hobby project,” Toscano explained. “I’ve been a longtime fan of amusing chat bots and natural language processing in general, and Twitter seemed like a good platform to try it out on: lots of people talking at high frequency all day long means lots of source material for the bot to work with.”

@gardnerkyla What about when Meat Warehouse

And @tofu_product has been busy. A scroll through the timeline shows people have been addressing it like a friend (“I thought you’d never come back!”), and giving it a gender (“Mr. Tofu”), even though the random chains it spits out are just your own tweets. So, basically, you’re talking to yourself.

The bot’s not always around, though; it goes through periods of withdrawal, then springs to life with a message that it’s ready to “chat.” It powers down because it’s tweeting too much. If only this function could be applied to real people on Twitter, am I right?

Toscano says the end goal is “getting in touch with people around the world who are interested in the bot” and seeing the different variations of responses. The bot’s got its work cut out for it. Here’s hoping it doesn’t suffer a Twitter meltdown.