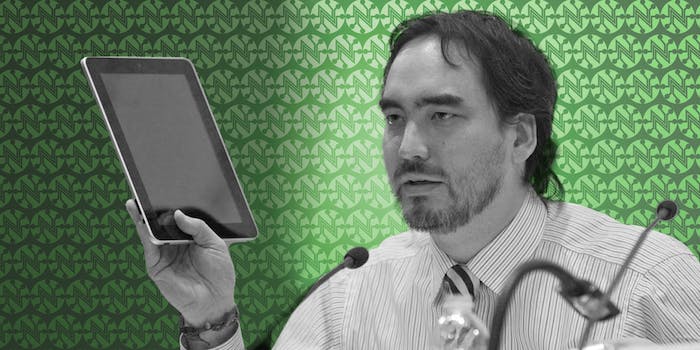 "[I]t's time for Wheeler to hear the wakeup call, and really realize that what the people want is something different than where he's been going."

Tim Wu is often called the “father of net neutrality,” thanks to an influential 2003 paper that identified and named the potential for Internet providers to charge more to access particular sites at maximum speed. He’s also a law professor, speaker, policy advisor, and until Tuesday evening was a dark horse candidate to become Lieutenant Governor of the state of New York. (Wu just lost to establishment candidate Kathy Hochul in the state Democratic primary.)

The Daily Dot spoke to him on the campaign trail on the eve of the election about that boring name, who to blame, and prophetically, how unfair elections can be.

You know that Wednesday is this giant online net neutrality protest—

Yes, of course, the Slowdown.

If you had to pick one person to call out to join in, who would you name?

President Obama. President Obama needs to. He campaigned on this issue. He has made it clear, but I would say, make it clearer where you stand on this. I guess that…Obama has made his preference clear. Though there is a limit to what he can do. He can’t order the [Federal Communications] Commission. Unlike in New York state, the Commission is actually independent.

The easy answer would have been [FCC Chair] Tom Wheeler.

I would say it’s time for Wheeler to hear the wakeup call, and really realize that what the people want is something different than where he’s been going. And I think he could be receptive to that message. I’m cautiously optimistic. I think he didn’t expect any of this. And he’s seeing what it looks like when the public really cares about an issue.

When you push for net neutrality, you’re saying you believe in Title II, right? You want the Internet classified as a utility?

You’ve got to be proud that you ushered the concept of net neutrality into public discourse. But be honest: “Net neutrality” is boring. You’d go back and change the name to something more marketable if you could, right?

Well, I’ll tell you, when I wrote that initial paper, I proposed two different names: Net neutrality, broadband discrimination. That’s the title of the paper: Net Neutrality, Broadband Discrimination. I thought, ‘I’ll see which one catches on.’ I guess people chose. [laughs]

It’s hard. I have no real control over it. You know, language is the biggest open-source project in the world. Nobody controls language. You put something out, and frankly, people decide to use it or they don’t. Anyone who thinks they can control language is kidding themselves. Net neutrality is obviously the one that caught on.

It sounds kind of serious in a weird way, and the alliteration is important. And people want to feel.. neutrality really is important to people. They want a fair playing field. You know, you think about businesses or speakers on the Internet. They don’t want a special favor, but they do want to feel like they can have their shot. And if other people like what they’re doing, then it’ll become popular. And that’s what net neutrality speaks to. Just that chance. Everyone wants to have their chance.

Has net neutrality come up a lot on the campaign trail? Has politics affected your perspective on it?

This election is an amazing opportunity to compare the electoral process and the process of putting stuff on the Internet, actually. On the Internet, you put your stuff on, and I won’t say it’s completely fair, but at least you have a relatively fair chance.

In politics, it’s the opposite. It’s usually not survival of the fittest. It’s usually that candidates of no particular distinction end up winning. Brand names—like, your father was the governor—matter enormously. It’s just not meritocratic at all. It’s sort of kind of shocking for someone who’s an Internet native to go from a system that’s so meritocratic. I mean, how did Google beat Yahoo? It’s not because they had connections. It’s because they were better. How did Facebook beat Myspace? You can criticize now, but it was a hell of a lot better coded.

It’s not clear in politics that people with better ideas always win. It has a lot to do with the deck being stacked. So it’s a real change to be in politics.