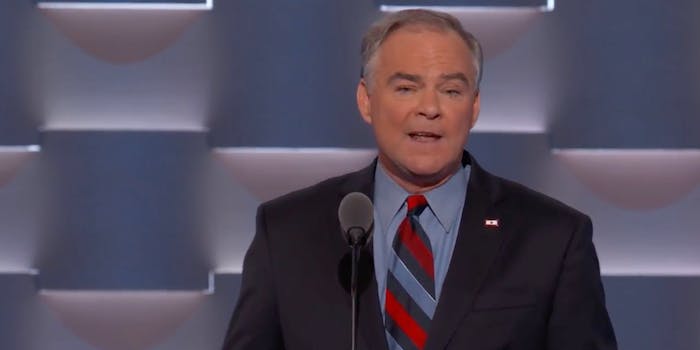 On the third night of the Democratic National Convention, Kaine introduced himself to America, outlined Clinton’s candidacy, and even had time left over to mock Donald Trump.

“Donald still says ‘believe me.’ Believe me? Believe me? I mean, here’s the thing, most people when they run for president,” Kaine said, “they don’t just say ‘believe me.’ They respect you enough to tell you how they will get things done.”

Kaine’s blustery impression of Trump, the Republican nominee, saying “Believe me!” was objectively lacking but succeeded in getting the crowd laughing and ready for more.

The vice presidential nominee took the opportunity presented by the convention’s huge audience to introduce himself to the country, describing his Jesuit faith as his “North Star” guiding him to work for social justice. Kaine outlined his governmental work on the local, state, and federal level, emphasizing his wealth experience.

He even snuck a Bernie Sanders shout-out into the speech.

“We all should feel the Bern, and we should all not want to get burned by that other guy,” Kaine said as the crowd cheered and Sanders smiled.

Kaine brought up his father-in-law, Linwood Holton, a former Republican governor of Virginia, in an attack on Trump.

“He’s voting for Democrats because any party that would nominate Donald Trump for president has moved too far away from his party of Lincoln,” Kaine said. “And I tell ya, if any of you are looking for that party of Lincoln, we’ve got a home for you right here in the Democratic Party.”

Kaine spoke Spanish on the podium and described his missionary work in Honduras, highlighting a connection to America’s Latino community that Democrats hope will benefit them come November.

“We’ve got to advance opportunity for everybody,” Kaine said. “No matter where you come from, how much money you have, what you look like, how you worship, or who you love.”

The speech was long in length and received a lukewarm reaction.