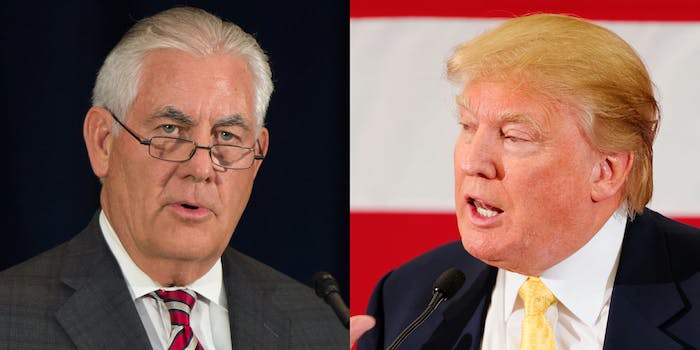 Vice President Mike Pence reportedly had to talk Tillerson down.

The report, based on conversations with at least three unnamed senior Trump administration officials, reveals simmering tensions within Trump’s team and attempts by other top officials to maintain the appearance of cohesion in a presidency plagued by high-profile controversies.

Update 9:51am CT, Oct. 4: Trump appeared to respond to the NBC News report on Wednesday morning, calling the network “fake news” and “even more dishonest than CNN,” which has born the brunt of the president’s anti-media ire.

NBC news is #FakeNews and more dishonest than even CNN. They are a disgrace to good reporting. No wonder their news ratings are way down!

Update 10:17am CT, Oct. 4: At a surprise press conference on Wednesday morning, Tillerson denied threatening to resign. “I have never considered leaving this post,” he said. The secretary of state vowed to remain in the post until the president asks him to step down. He did not deny calling Trump a moron. “I’m not going to deal with petty stuff like that,” Tillerson said in response to a reporter’s question about the alleged insult.