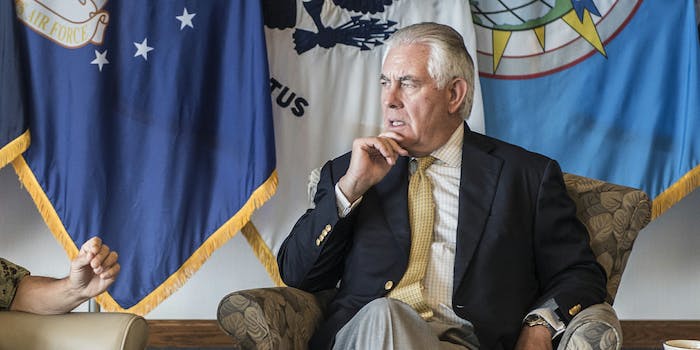 State Department officials have formally accused Rex Tillerson, President Donald Trump‘s secretary of state, of violating a law meant to stop foreign countries from enlisting child soldiers into their militaries, according to a new report.

A memo obtained by Reuters shows that officials believe Tillerson violated the Child Soldiers Prevention Act in June when he excluded Iraq, Myanmar, and Afghanistan from a list of countries that use child soldiers, the news outlet reports.

By keeping the countries off the list—all three of which are considered allies in several foreign conflicts and agendas—it makes it easier for them to help the United States in military actions, according to Reuters. Tillerson’s decision to keep them off the annual list was not backed by recommendations by State Department bureaus in the Middle East and Asia.

“Beyond contravening U.S. law, this decision risks marring the credibility of a broad range of State Department reports and analyses and has weakened one of the U.S. government’s primary diplomatic tools to deter governmental armed forces and government-supported armed groups from recruiting and using children in combat and support roles around the world,” the memo reads.

The Child Soldiers Prevention Act was passed in 2008 as a way to ensure that no children under the age of 18 were enlisted as child soldiers in foreign countries. The law requires that the United States create an annual list that shows countries currently using child soldiers.

In response to the memo from State Department officials, an adviser for Tillerson said Iraq, Myanmar, and Afghanistan do use child soldiers, but said other countries on the list have not been making efforts to “correct their child soldier violations.”