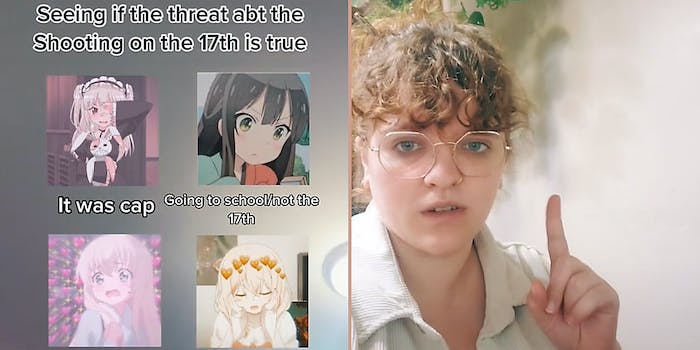 In recent days, parents across the country were warned about possible school shootings planned for Friday, Dec. 17. The warnings, however terrifying, now seem to be bogus. Numerous sources report that viral rumors of a wave of school shootings began on TikTok.

As the rumors spread on social media, local newscasts, school districts, and police all issued warnings about the possibility of school shootings. Some of the warnings claimed that there was a possibility schools would be bombed or targeted with other violence.

Although many stories noted that the threats originated outside the district or even the state, in an arguably understandable abundance of caution, some schools canceled classes. Parents kept kids home. Police forces went on high alert.

Some noted that the rumor of mass violence at schools was unsubstantiated. But that didn’t stop the warnings from continuing to spread across the internet.

Some pointed the finger at social media generally or TikTok particularly for enabling the rumor to take hold.

“I don’t blame #TikTok, per se, but it’s definitely a catalyst to the proselytization of dangerous drivel and behavior,” tweeted @lesleyabravanel.

TikTik denied that threats of school shootings circulated on its platform, the Washington Post reports. There were, however, videos warning people about the planned violence at schools. The Post noted that warnings about school shootings planned for Friday were also found on Snapchat and Facebook.

Although the viral rumor appears false, there were some fears that its very virality would inspire real violence.

A superintendent in Michigan posted a letter to parents on Facebook that said, “The original threat is believed to have started as a way for students to skip or be excused from school and has morphed into something more disturbing.” The letter didn’t detail what specifically was disturbing.

Many were outraged that anyone would spread false information about plans for school shootings.

“There have been 21 school shootings in the U.S. since August. Joking on TikTok about bringing guns to school or shooting up schools is not funny. Knock it off!” tweeted one.

The rumor put schools in the difficult position of deciding whether to address something that probably wasn’t true—but if it were, would have deadly consequences.

Still, some felt that the reaction was overboard.

“So now every local cable news station is running sensationalized headlines about terrifying threats to schools based on rumors that spread on TikTok, and schools themselves are amplifying these rumors by sending out emails, but the discourse is ‘the Internet is bad for kids,'” tweeted Fight for the Future’s Evan Greer.