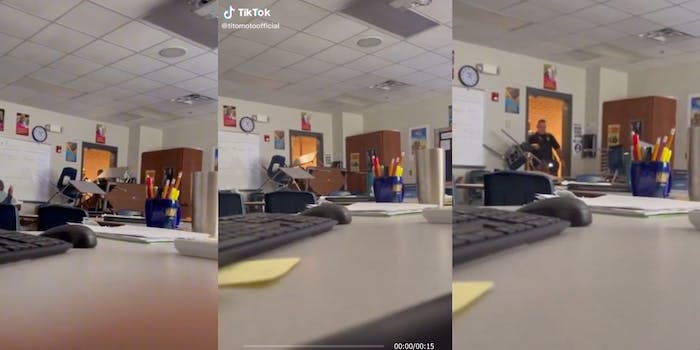 'That was one hell of a barricade.'

A viral video showing students hiding behind a barricade following a school shooting has sparked debate about the usefulness of barricades in these situations.

The video, shared to TikTok by @titomotoofficial, shows police coming into a classroom and knocking down a barricade made of desks and chairs following a school shooting.

The poster wrote in the video’s caption that this took place at his nephew’s school, although he does not state where that school is located. There have been 14 reported school shootings in the U.S. since classes began in August, according to Insider.

As police knock down the barricade, students raise their hands. Commenters suggested that the barricade was too easy to break down, however, barricading a room is a key component of ALICE active shooter training, which is used by many schools and police departments.

“That was one hell of a barricade was totally gonna keep the intruder out,” one commenter wrote.

The intent of the barricade, according to these protocols, is not to keep a shooter out. All steps in ALICE are designed to disrupt a shooter’s decision-making process and ability to shoot accurately, according to its website.

“For people who don’t know—sometimes any type of barricade good or bad will deter a shooter because of their state of mind they see it as a block,” another commenter wrote.

Others suggested teachers should be armed, to deter people from bringing weapons on campus.

However, there were more commenters pushing back against the idea that teachers should have to be armed to go to work in a school.

“For everyone saying arm the teachers… I challenge you to spend an entire school quarter as an actual employee in a school,” another commenter wrote.

The Daily Dot has reached out to @titomotoofficial on TikTok regarding the video.