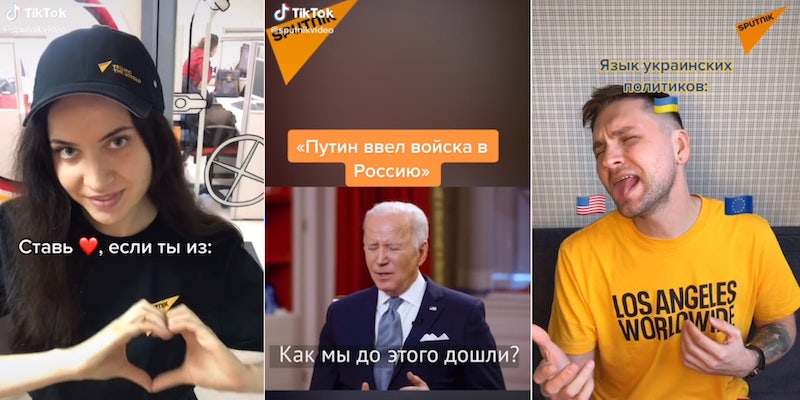 ‘A way to quietly get around the ban it implemented’: TikTok’s FYP shows banned videos to Russians

'It’s way past time for TikTok to explain.'

TikTok has been showing new content to users in Russia despite a supposed blackout of the country, according to a new report. It means, among other things, that Russian state media has an under-the-radar propaganda channel at its disposal.

Without a virtual private network (VPN), researchers were able to create accounts, follow verified users, and then receive promoted content from said users via the For You Page (FYP).

The report from European digital rights group Tracking Exposed alleges that TikTok has been “shadow promoting” users new content in Russia despite a ban on international and newly uploaded content. Shadow-promotion: TikTok’s algorithmic recommendation of banned content in Russia is the group’s third in a series of investigations into TikTok and Russia since the invasion of Ukraine in February.

The first two reports uncovered decisions that TikTok made in response to Russia’s “fake news” law, which threatens prison for people who publish news that the Kremlin thinks falsifies the Ukraine invasion. Tracking Exposed initially found that the ban on new uploads was inconsistent during a period in March, which allowed some users to post pro-war content and propaganda. TikTok remedied the issue, but the lapse effectively locked users in a pro-war, pro-Russia loop with no new content to break it up. This new report finds that TikTok has effectively reversed course on the removal of international content for Russians—and the upload ban for select accounts—and is now promoting it via FYP algorithm.

In a quarterly Community Guidelines and Enforcement Report released in June, TikTok claims that since March 6, “content posted by accounts based outside of Russia is not available for distribution in Russia” because of the fake news law. However, in Tracking Exposed’s report, researchers were able to see content posted after March 6 from non-Russian accounts from a Russian-based TikTok account.

Using newly created TikTok accounts and placing them in Russia via VPN, researchers were able to see videos posted well after the supposed ban on international content went into effect. In one instance, they followed the BBC TikTok page, which showed there were no videos available to them, only to be pushed a video from the BBC about the Ukrainian invasion minutes later. The TikTok from the BBC that was promoted was from May, well after the content ban went into effect.

The Tracking Exposed account also followed Sputnikvideo’s TikTok account, a Russian-controlled media outlet. The account was once again shown a video from after the content publishing ban from Sputnikvideo, which was also from May.

“Content published outside Russia is not actually banned as TikTok states, and can be easily accessed through the For You Page after following the account,” the report states. “This demonstrates there is actually no difference between Russian and non-Russian profiles: once followed, the For You Page makes new videos published by Russian accounts (like in the case of Sputnikvideo) and non-Russian content equally available to users in Russia.”

The group said it was unclear why TikTok was “shadow promoting” content in Russia, but said it could be to stay profitable in the country.

“TikTok could be aiming to remain operational in Russia by appearing to comply with local laws on the surface, while trying to make the platform attractive for the Russian users with recently updated content by giving some top accounts the ability to post despite the ban,” they said in the report.

TikTok has not responded to any of Tracking Exposed’s reports and has not clarified why the new and international content ban seems poorly implemented.

“Taken together, these findings show that the content restriction introduced by TikTok in Russia is implemented inconsistently at best, and at worst a way to quietly get around the ban it implemented in response to the Russian ‘fake news’ law,” the report said. “Only TikTok can explain why this is happening.”

The report also found that some verified Russian accounts have been able to post new content as recently as July 25, somehow escaping TikTok’s ban on new content in the country. Russian film database account Kinopoisk was able to be viewed from Tracking Exposed accounts in both Russia and Italy, and new uploads from July were seen from both accounts.

Not only is it dangerous for Russian state media to skirt the rules that TikTok created, but TikTok has long been criticized for data rights violations, a lack of transparency, and changing its algorithm and back-end operations without any announcement or statement.

TikTok has skirted regulation for a long time, but those days might be numbered. In the U.S., Federal Communications Commission Chairman Brendan Carr called for Apple and Google to remove the app from their stores over safety concerns, and Congress sent an inquiry to TikTok over the same concerns. In Europe, the Digital Services Act would require TikTok to heavily modify the way it does business if it wants to continue to operate in Europe, spelling a massive overhaul for the tech giant in the coming months. In a blog post last month, TikTok Chief Operating Officer Vanessa Pappas said they would provide “selected researchers” with “public and anonymized data” on the platform so they can “assess content and trends or conducts tests.”

This latest report confirmed the findings of Tracking Exposed’s second investigation, which showed that while TikTok’s upload ban is loosely enforced on some users, most Russian accounts are unable to upload new content without using a non-Russian IP address through a VPN. Content uploaded using this method is not available via the user’s profile page in Russia, but the new content can be seen outside of Russia or with other Russian users with a non-Russian IP.

Tracking Exposed said that the investigation shows a need for “careful implementation” of new regulations to bring transparency to apps like TikTok. They advocate for harsher public scrutiny of the app, as well as tougher regulations on audits and moderation algorithms.

“I have never seen a platform opaquely promoting content that it publicly said it had banned. Only TikTok can explain why the For You page is shadow-promoting content in Russia,” said Salvatore Romano, head of research at Tracking Exposed. “Given how vital the flow of information is in times of war, it’s way past time for TikTok to explain what its policy on content in Russia is once and for all.”

We’ve reached out to TikTok.