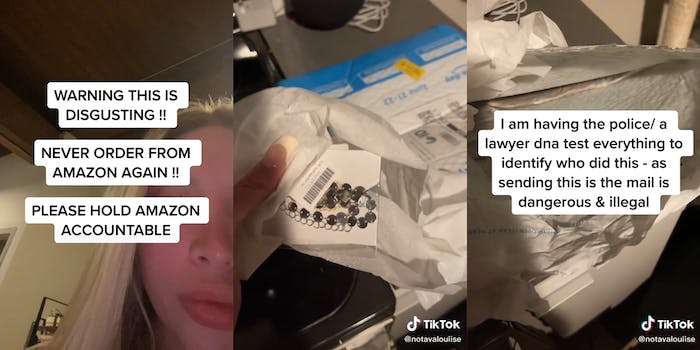 'Ms. Louise is known for fabricating stories to further her own notoriety,' the tech company said.

Amazon has denied claims made by a popular social media influencer that one of her recent orders contained used menstrual pads.

In footage posted to TikTok on Thursday, Ava Louise, who went viral last year after licking an airplane toilet seat, alleged that a package she received after ordering jewelry contained blood and several sanitary napkins.

“After removing the body chain I noticed a foul smell coming from the packaging,” she said. “When I opened the packaging I noticed dried blood and not one but three blood-soaked period pads.”

In numerous follow-up videos, Louise claims to have retained a lawyer over the matter who advised her to file a police report.

The influencer also claims she was offered a refund and a $10 credit from Amazon after lodging a complaint with customer service.

In a statement to the Daily Dot, Louise said that she was “shocked & disgusted” by the alleged incident.

But Amazon on Friday told the Daily Dot that an internal investigation into the allegation found Louise’s claims to be false. The company also cited the influencer’s history of spreading sensational claims online.

“Ms. Louise is known for fabricating stories to further her own notoriety. We thoroughly investigated her claims and can say for sure that this is just another of her unfortunate hoaxes,” Amazon spokesperson Kelly Nantel said.

When questioned about her previous controversies, Louise denied that her recent viral video regarding the Amazon package had been faked.

“Unfortunately the only reason this is getting any attention is because I have a following on social media, and I feel bad for everyone else who has experienced this without any solutions offered or attention drawn to the matter,” she said. “This isn’t funny, this isn’t for clout, this is a public health hazard. Amazon needs to do better.”

Louise has posted six videos regarding the incident to her TikTok thus far, which have received a collective total of more than 5 million views.