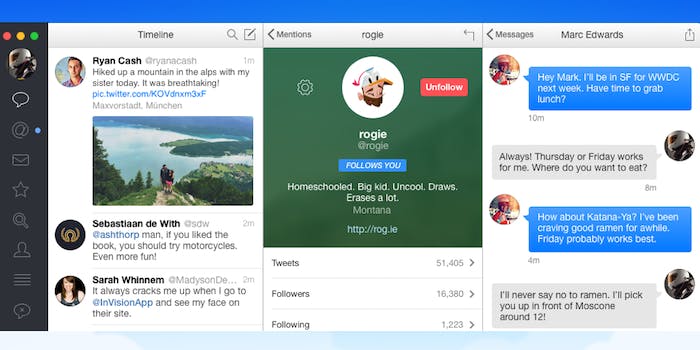 #BreakingMyTwitter: Twitter is disabling a core functionality of third-party apps

Third-party Twitter clients such as Twitterrific, Tweetbot, and Tweetings have an impending problem on their hands: Their apps could cease to properly function this summer. After June 19, Twitter is eliminating a core functionality called “streaming services.” This feature is what has allowed these third-party clients to function as successful Twitter replacements for so many years.

Without this capability, apps can’t automatically refresh, and they also can’t send out push notifications. The change will affect third-party Twitter clients on all platforms, but particularly those on iOS and Android because of how it affects push notifications.

Developers are unsurprisingly unhappy about the change, which Twitter first announced roughly a year ago. “Despite many requests for clarification and guidance, Twitter has not provided a way for us to recreate the lost functionality,” the website Apps of a Feather explains of the current situation for app developers.

Twitter developers want to update their apps and ensure they will function properly going forward. Twitter isn’t giving them a way to do that.

We’ve tried to get answers, but I think it’s pretty clear Twitter corporate has decided they don’t want us here and are hoping we’d just go away. We had to start letting everyone know what’s coming. #BreakingMyTwitter

I worked on Twitter for iPhone for four years. The day it becomes the app I’m forced to use in order to use Twitter on my phone is the day I stop using Twitter. #BreakingMyTwitter

I wonder if @TwitterDev has considered that they'll lose their most active users should third-party app makers be forced to stop development? #BreakingMyTwitter

As these tweets highlight, in abandoning its ecosystem of third-party clients, Twitter is alienating both developers and its most hardcore clientele. Developers have made notable contributions to Twitter’s success over the years, including pioneering features that Twitter later “borrowed” and implemented in their own clients. Some clients make Twitter available on platforms where the app has no native client, as well. As for many Twitter power users, the detailed, customizable alerts, scheduling options, and other tools offered by third-party clients is what enables them to do their jobs properly.

Hopefully, Twitter will listen to its developer community, give them access to the latest beta (the Account Activity API), and give them a way to ensure their apps work properly going forward. Twitter users are still Twitter users—even if they’re not tweeting from Twitter’s apps.

H/T Apps of a Feather

Update 3:54pm CT, April 6: Twitter posted a response to the criticism it received for restricting third-party apps. It explained on its @TwitterDev account that developers will receive “ample” time to migrate to the new Account Activity API. It also posted a form for developers to apply for the beta.

Last year we announced our plan to retire Site Streams & User Streams, and replace them with the Account Activity API (currently in beta). We are delaying the scheduled June 19th deprecation date.

As always, we’re committed to providing ample time to migrate. We will provide at least 90 days notice of deprecation date from when the Account Activity API becomes generally available to all developers. More specifics on timing to come.

Developers currently using Site Streams and User Streams can review how to migrate to the Account Activity API with our migration guide. https://t.co/Q5uDmysM0y

As a reminder, developers who want beta access to the Account Activity API can still apply. https://t.co/um2NQDJXUe