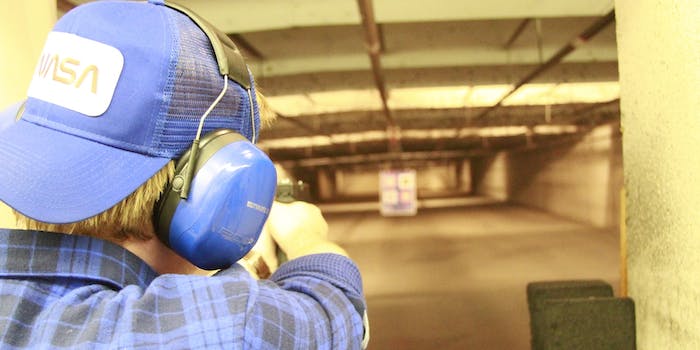 America's gun owners have never had their own social media space. Until now.

While an estimated one in three Americans owns a gun, there are very few Internet services gun owners can claim for themselves, and none of them would qualify as a “social network.”

That’s all about to change.

Web developer Jonathan Rockett has spent the last two years getting ready for April. His idea started small, as a forum for firearm collectors, before erupting into something much more ambitious. It all began with a conversation between the 39-year-old and his father, a hunter and resident of Houston, Texas. As a major U.S. demographic, the pair wondered, why are recreational shooters always behind the times? That’s how a phone app, which Rockett describes as the “Facebook for guns,” was born.

The probable answer to the question Rockett and his father have been kicking around for years, according to a recent study, is that the majority of American gun owners are white males and over the age of 55. That’s hardly the tech-savvy demographic one would hope to capture when launching a new Internet service.

Punctuated by a winky-face emoji, the message simply read: “I’d love to meet you and shoot guns with you.”

Due to a 1996 ban on federal funding for firearms research and a web of state laws that keep gun-ownership a mystery, no one can say with any certainty who owns all of America’s guns. For what it’s worth, the firearms industry—which is largely responsible for all this secrecy—claims to have observed in recent years a singular rise in the number of women, urban residents, and young adults regularly practicing at public shooting ranges.

If true, that’s great news for Rockett, because in a short amount of time he’s hoping to attract millions of target shooters to a new social media platform, dubbed “The Shooting Club.”

South by Southwest in the crosshairs

En route to Austin, Texas, to cover my third consecutive South by Southwest festival, I received an unprovoked invite via Twitter from an account called @TheShootingClub. Punctuated by a winky-face emoji, the message simply read: “I’d love to meet you and shoot guns with you.” As an ocean of potential SXSW stories slowly overtook my inbox, an invitation to a Texas gun range stood out from the typical film-star, startup, cocktail-hour fracas. My curiosity was piqued.

I arrived at an indoor range called Red’s roughly eight miles southwest of the city’s convention center, the focal point of all things SXSW. Once inside the red-and-white brick building, I was encased by the sound of constant gunfire. The well-reviewed range, which accommodates pistols and rifles for up to 100 yards, is cramped, with guns and gun accessories taking up every inch of free space. The staff were decked out in typical hunter regalia: camouflage and trucker hats.

I was out of my element, to be sure, and admittedly nervous about how a rushed interview about guns with someone I’d never spoken to before was going to play out.

Standing in the center of the main hall, I found Jonathan Rockett delivering his spiel to a group of customers between racks of gun parts. At first blush, he seemed the opposite of what popular culture has made us think of as a “gun-nut.”

When we got to talking, I learned that Rockett had attended a liberal college where he studied theater. He lived in Los Angeles for nearly a decade before moving to Houston two years ago, which is where he and his father came up with the idea for Shooting Club.

“I was once a circus clown with Ringling Brothers,” Rockett tells me, unabashed. “I used to be a unicyclist.” He started his first business, “Laughter Unlimited,” at age 12 and performed magic shows and juggling acts at other kid’s parties. The last company he founded was focused on Web design. The whole “gun thing” happened by accident, he says. He was never really “into it,” though he comes from a family of hunters. “As a shooter, I was just born with natural talent.”

As it turns out, Rockett and I are not cut from the same cloth. After spending a half hour on the range, I learned my aim with a handgun is atrocious (read: dangerous) at any distance over 10 yards.

Before I arrived at Red’s range, I was frankly unimpressed with the idea of Rockett’s new app. I had imagined it would extend as far as to allow strangers with guns to connect online, meet IRL, and shoot together at nearby ranges.

I was completely off base.

After playing around with a demo, Shooting Club was surprisingly more than just a Facebook-event generator for recreational shooters. It’s gamified in such a way that allows competitive interaction without the hassle or awkwardness that generally follows a first-time IRL meet. Think Strava, the app joggers and cyclists use to compare running distances and times. You’re technically running with your buddies—they just happen to be hundreds or thousands of miles away.

Of course, the app isn’t being used to its full potential until the users actually visit a shooting range and fire their guns. This is where Shooting Club stands to make a lot of money.

When the app rolls out on the Apple Store and Google Play in April, here’s how it’ll work: You enter a participating gun store and purchase an official Shooting Club target (or buy one online), which cost about the same as other types of shooting targets. Each of the sheets contain four smaller targets meant to be hit at different distances: 5, 10, 15, and 20 yards. “For the competition there are specific requirements,” says Rockett. “No AR-15s, rifles, or shotguns. Right now, it’s handguns only, .32 caliber or higher. There’s certain barrel length maximums, so you don’t have those long, like, .22, Olympic-level guns.”

“It’s geared toward the ‘average Joe’ gun owner who owns a revolver, or 9mm Beretta, that he wants to get better with, or has around the house for home defense,” he says.

After shooting, users will engage the in-app camera, snap a picture of their target, and add up their score. (On the range, I learned hitting one of the four targets with more than five shots eliminates your best shot, which can drastically reduce your score.) Scores are graded along a curve, so that new shooters on the leaderboards aren’t completely destroyed by a handful of retired cops and military vets. This is known as the “money score.”

Users can pay small fee (around $5) to enter various shooting competitions and, in return, win cash prizes and accessories, like holsters or custom sights, from companies partnering with Shooting Club. The app will also allow users to click on other profiles and check out their targets and score. The whole scoring system is largely based on the honor system; however, Rockett says the winning targets will always be closely scrutinized. Apparently, it is possible to tell the difference between a bullet hole in a sheet of paper and one that’s been poked through with a sharp pencil.

The gun industry is always technologically behind, Rockett says. “No one’s really tackled this space yet,” he says, referring to social media. When most people imagine the typical gun owner, he says, they see “old, white guys, kinda backwoods.” With Shooting Club, he’s instead looking to capture some of the lesser represented demographics within the shooting scene. “Families, kids, moms. They have ladies nights at a lot of these ranges,” he says. “Some of the smaller demographics that are really growing are millennials, younger people, women, and minorities.”

“There’s a certain intimidation factor at gun ranges,” he continued. “The metaphor I use is, if you’ve never joined a gym before, and there’s all these meatheads, and you don’t know how to use the equipment, and you’re intimidated, it’s kind of like that here.” Shooting Club’s newbie-friendly scoring system, along with other instructional elements, are intended to “empower and educate new gun owners unfamiliar with range etiquette, or what kinds of guns there are, et cetera,” he says.

“We find that accidents happen with firearms because people don’t know how to use them and aren’t proficient.”

In speaking with other recreational shooters who’d never heard of the Shooting Club, having their own Facebook-like app made sense. A Lyft driver in Austin went was as far as to describe the idea as a welcome “safe space” for gun owners. For others, posting photos of their guns online was like holding up a sign that reads, “Please criticize me about owning a gun and tell me what a horrible person I am.”

Of course, guns are deadly by design, and that’s partly, if not entirely, responsible for the allure. Guns are empowering in a way few objects are. They can make a person feel safe, protected, and in control.

In the wrong hands, however, firearms can give that person enormous capability to take innocent lives. Earlier this month, a toddler in Florida gained access to a .45 caliber handgun and shot his mother in the back. “Even my 4-year-old gets jacked up to target shoot the .22,” she wrote on Facebook a day before. Gun deaths now account for as many fatalities in the U.S. as car accidents.

Safety is top priority for the Shooting Club, according to Rockett. Embedded within the app’s pages are videos intended to teach users how to properly load, shoot, clean, and transport firearms.

“We find that accidents happen with firearms because people don’t know how to use them and aren’t proficient, right? A gun is a very safe thing in the hands of someone that knows how to use it,” he says. “It would be like if you let your kid drive your car and he’s never driven a car before. He’s going to have an accident.”

So, is the world ready for a “Facebook for guns?” Either way, Rockett is going to give it his best shot.