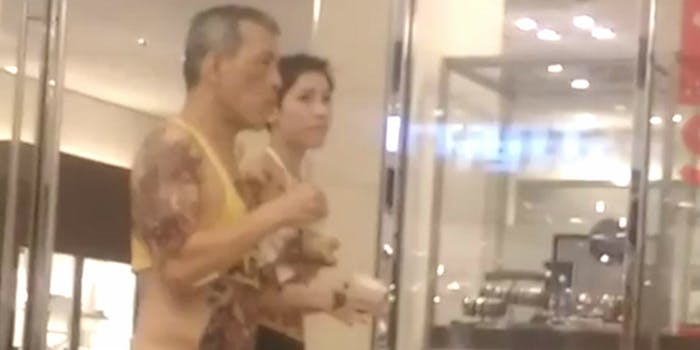 People can be jailed 15 years for insulting the king under Thailand's strict law.

Thailand has not gone through with its threat to ban Facebook for spreading video footage of its king wearing a crop top.

The deadline for removing the viral video, which authorities in Thailand deemed “critical of the royal family,” passed this morning, but Facebook is still around. The anonymous person who posted the video could be jailed for up to 15 years under the country’s strict lèse-majesté law for “insulting” the monarch.

Facebook is geoblocking this video of Thailand's King Vajiralongkorn so users in Thailand can't see it pic.twitter.com/QAE2SNr2KY

The footage shows the king walking around a Munich shopping center wearing a skimpy yellow crop top, tight faded jeans, and what appear to be temporary tattoos. It’s not the first time King Vajiralongkorn has been seen wearing this outlandish outfit. Bild, a German tabloid, published a photo in July of the king standing on a runway wearing similar clothes next to a woman who many believe to be his mistress.

Takorn Tantasith, the secretary general of the National Broadcasting and Telecommunications Commission in Thailand, said, “If even a single illicit page remains, we will immediately discuss what legal steps to take against Facebook Thailand.”

Just last week, an internet service provider group emailed Facebook CEO Mark Zuckerberg asking the posts to be removed. The video has been geo-blocked, but 131 pages containing the “illicit” material remain, according to Thai authorities.

Facebook restricted 10 pieces of content in Thailand in the first six months of 2016, and 40 in the second half of the year under the new king. The Thai government closed nearly 7,000 web pages since 2015 and ordered internet service providers to close 600 Facebook pages.

In 2015, a Thai man faced a 32-year prison penalty for liking and sharing a Facebook post that criticized alleged corruption in the country. Human rights groups said the man has “disappeared” since his arrest and was held in secret military custody for a week over Facebook status updates.