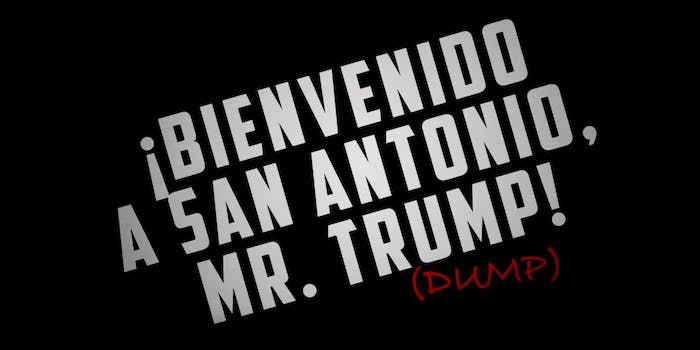 Donald Trump‘s anti-Mexican sentiment is coming back to haunt him.

The video–voiced by former Texas Sen. Joe Bernal–discusses the rich culture and values held by many in San Antonio. Comprised of footage from mainly Latinx residents, the video thanks “the immigrants that built [San Antonio],” which, yes, includes Americans of Mexican descent.

In a Facebook post, Martinez Fischer said: “As San Antonio prepares to roll out the welcome mat to Democrats from across the state, one loud and unwelcome guest plans on visiting our city to raise money. We haven’t forgotten your hateful and divisive rhetoric, Mr. Donald J. Trump.”

A short montage of Trump shows some of his views of immigrants from Mexico, including footage in which he refers to them as “rapists” who bring drugs and crime into the United States and reiterates his desire to build a wall on the U.S.–Mexic0 border.

In an emailed statement to the Daily Dot, Martinez Fischer said the video gives Trump a “San Antonio history lesson and invites him to leave his racist rhetoric behind, while he visits our beautiful city.”

Martinez Fischer continued: “Throughout his campaign, Donald Trump has espoused a level of bigotry and racism that is almost unprecedented in modern national politics. Under the guise of ‘telling it like it is,’ Trump has called Mexican immigrants ‘racists’ and ‘killers,’ and has even accused a federal judge of being biased because of his Mexican heritage.”

Martinez Fischer added, “Trump’s plan to build a giant wall along the Mexican border would be cartoonish if it wasn’t coming from a presidential candidate.”

The Daily Dot was not able to reach the Trump campaign for comment.