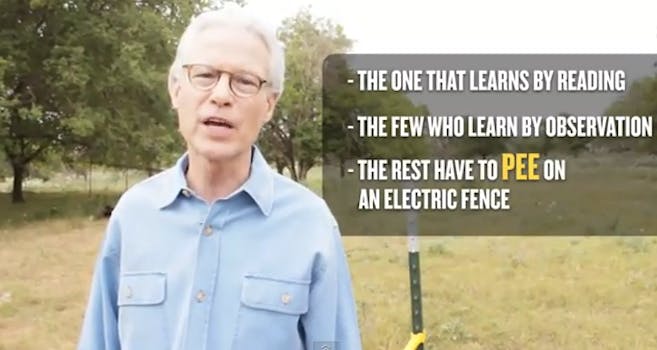 In his latest YouTube ad, the Texas politician pledges to not urinate on electric fences.

Never has a campaign ad for someone running for Texas Railroad Commissioner gone viral. Until now.

Roland Sledge has found the perfect amount of absurdity for his most recent YouTube video to take off, and yes, he’s using a sledgehammer in all of his campaign ads.

In the minute-long video, Sledge breaks down Will Rodger’s three types of men: the ones who learn by reading, the few who learn by observing, and the rest who learn by pissing on an electric fence. He then goes on to attack politicians who only run for office for personal gain.

Sledge also indirectly attacks former Illinois Governor Rob Blagojevich by bringing up how much his corruption case cost Illinois taxpayers and then showing him peeing on an electric fence, representing the generic politician. At least that’s what it all appears to be.

Blagojevich is a particularly interesting target since he’s not running for Texas Railroad Commissioner and even if he wanted to, his campaign from a jail cell would be pretty tough.

Sledge’s ad has taken off in popularity with more than 30,000 views by Thursday evening, pretty good considering it was only posted on Monday.

Also, for those wondering what exactly the Texas Railroad Commission is, it was established in 1891 to regulate railroads in Texas, and overtime it included gas, oil, and mining companies. Eventually, the duty of regulating the railroads went to the Federal government, but the state agency has kept its name.

Of course, absurd political YouTube videos are nothing new, especially in Texas (see Rick Perry’s presidential campaign). The king of Lone Star State satire may be Kinky Friedman, who ran for governor in 2006. Although he didn’t win, the self-proclaimed Jewish cowboy did leave a collection of KinkyToons.