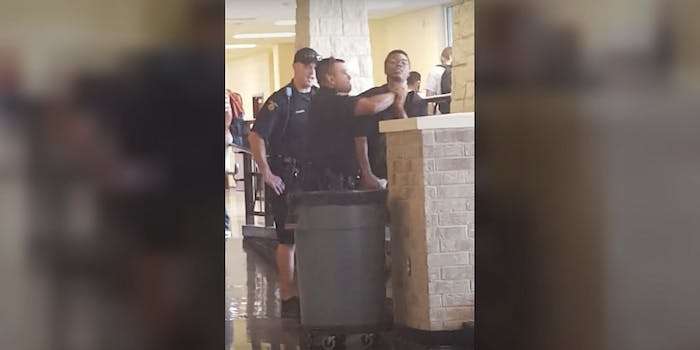 Screengrab via The Lyrical Elitist/Youtube

The student's father says he plans to press charges for excessive use of force.

The ever-widening use of police body cameras is redefining transparency in law enforcement, but as the never-ending stream of footage on YouTube reminds us, there’s often no substitute for a quick-thinking bystander with a cellphone.

Take this video captured by a high school student in Round Rock, Texas. It shows a police officer wrapping both hands around the throat of 14-year-old Gyasi Hughes, before briefly placing him in a chokehold and forcing him to the ground.

While the video lacks both audio and context, it shows clearly the officer who apparently choked Hughes thumping his own chest and repeatedly grabbing or shoving the teenager. Hughes is spun around 180-degrees by the neck after attempting to push the officer’s hand away from his body. Within a second, he’s subdued, face-down, and handcuffed with the help of a second officer.

The officer seen in the video with his hands around Hughes neck was identified by a local news station as Officer Rigo Valles.

Hughes was reportedly involved in an altercation with another student over a pair of sports goggles. He says the other student pushed him, so he pushed back. Valles and the other officer arrived shortly after and cornered him.

According to school officials, Valles was attempted to “de-escalate the situation by walking [Hughes] to another area of the building,” but Hughes refused. “After repeated attempts to calm the non-compliant student, and stop him from going after the other student, officers were forced to detain him for his safety and the safety of others,” the administrators wrote in a statement.

Hughes tells a different story. In an interview with a local TV station, he said Valles instructed him to “walk away,” and he was trying to, but the officer continued pushing him. The sophomore admits he was “amped up over the fight” and not thinking clearly. “I was just very upset,” he said.

Regardless of which version of the story is most accurate, Hughes’ father, Kashka Hughes, says the officer’s behavior was overly aggressive. “The school or police department should re-assess some of their rules of engagement when they’re dealing with situations like this and realize they’re teenagers, and they’re kids, and they tend to be very emotional,” he told KVUE.

The elder Hughes says he plans to press charges against Valles for using excessive force. “[The officer] should have been trained well enough to know that this is a 130-pound child,” he said, “and that the action that was taken was totally unnecessary.”