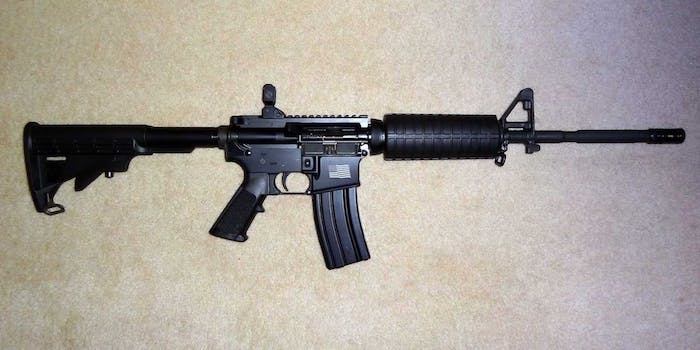 Texas congressman will arm a Twitter follower with an AR-15

Yes, it will require a background check.

Many members of congress use Twitter to stay in touch with their constituents. Some use it to arm them.

Rep. Steve Stockman (R-Texas), used his Twitter account Wednesday to announce an AR-15 giveaway. He invited all interested U.S. citizens to submit their names in hopes of winning the same kind of assault weapon that was used in the Sandy Hook massacre and has since become a symbol for those opposing new gun regulations.

The following tweets were posted about ten minutes apart from each other Wednesday evening and, as of Thursday morning, had drawn a combined 27 favorites and 131 retweets from followers.

Want to win a FREE AR-15? Congressman Steve Stockman is giving one away!Sign up at stockman2014.com/ar15-entry/ Grab this gun before Obama does!

Stockman’s office did not immediately respond with a reason for why the congressman chose to host this giveaway and why specifically the AR-15 was selected as a prize. The contest website implores contestants to “enter to win the gun Obama doesn’t want you to have.”  The contest rules state that all applicants must be at least 18 years of age and meet all relevant federal, state and local laws. The gun would be awarded through a licensed dealer, who would perform a background check.

The contest has already drawn plenty of criticism from the regular line-up of bloggers, who are quick to point out the conservative representative’s extreme Second Amendment views. This is the same congressman who recently released a bumper sticker that said, “If babies had guns, they wouldn’t be aborted!”

Suffice to say, the giveaway has drawn a lot of vitriol from people on both sides of the gun control debate. Supporters see the contest, which has its drawing on July 4th, as a stand against proponents of gun control and the Democratic party.

Hoping to piss off a lib, I entered-Rep. Steve Stockman gives critics ammunition with AR-15 giveaway twitchy.com/2013/05/08/rep… via @twitchyteam

But many don’t “<3” Stockman’s actions. Reaction from gun control advocates ranged from impassioned to bemused.

I entered. If I win I will destroy it MT @reelect Stockman win a FREE AR-15. Rep Steve Stockman is giving one away! stockman2014.com/ar15-entry/

Stockman isn’t the first person to give away an AR-15 online, though. Such raffles have become common in recent months. One such contest on Facebook was shut down by administrators.

The AR-15 was the same weapon used by Adam Lanza, the young man currently charged with the murder of six adults and 20 children at Sandy Hook Elementary School in Connecticut last December. Despite this grim reputation, it’s become a symbol around which anti-gun control advocates have rallied in recent months as lawmakers have proposed legislation that could potentially take the gun off the market. However, these and more modest restrictions have yet to pass through congress.