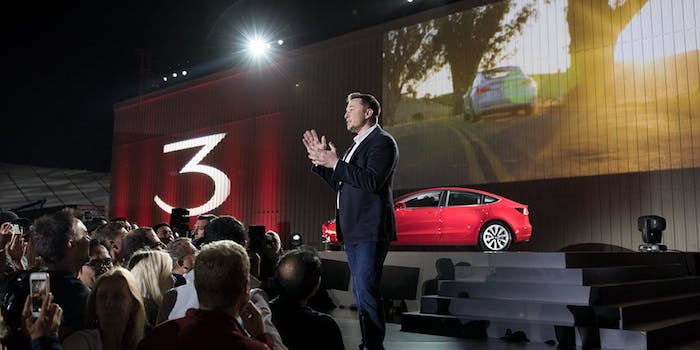 Musk would still be CEO of the company.

Tesla has been going through a rough patch lately, and some shareholders are not happy about it.

The company was forced to pause production on its already delayed Model S earlier this month to address bottlenecks in its manufacturing process. Its cars have also recently been involved in a handful of crashes while on Autopilot—including one incident resulting in a fatality. Tesla’s stock price has taken some dips and is predicted to drop even more by the year’s end.

Now, Tesla shareholders may be reconsidering CEO Elon Musk‘s role with the tech company. At its annual meeting in June, shareholders will vote on a measure that would remove Musk as chairman of Tesla.

According to Electrek, Tesla shareholder Jing Zhao is proposing that, at this point, combining the role of CEO and chairman at the company doesn’t make sense anymore.

“An independent chairman of the board of directors is the prevailing practice in the international market, such as in the United Kingdom,” Zhao wrote in his proposal. “In the United States too, many big companies already have or began to have an independent Board Chairman. Tesla should not be an exception.”

Tesla board members are calling on shareholders to vote against the measure. In a proxy statement sent to shareholders, it claims that Tesla’s success to date would not have been possible without Musk’s leadership on the board. His day-to-day involvement with the company has been critically helpful to the board, it says.

“Our achievements to date notwithstanding, the Company is still at a point in its development where we must execute well in order to realize our long-term goals, and separating the roles of Chief Executive Officer and Chairman at this time would not serve the best interests of the Company or its stockholders,” the proxy statement says.